Rising to the occasion: Wood taking advantage of his shot 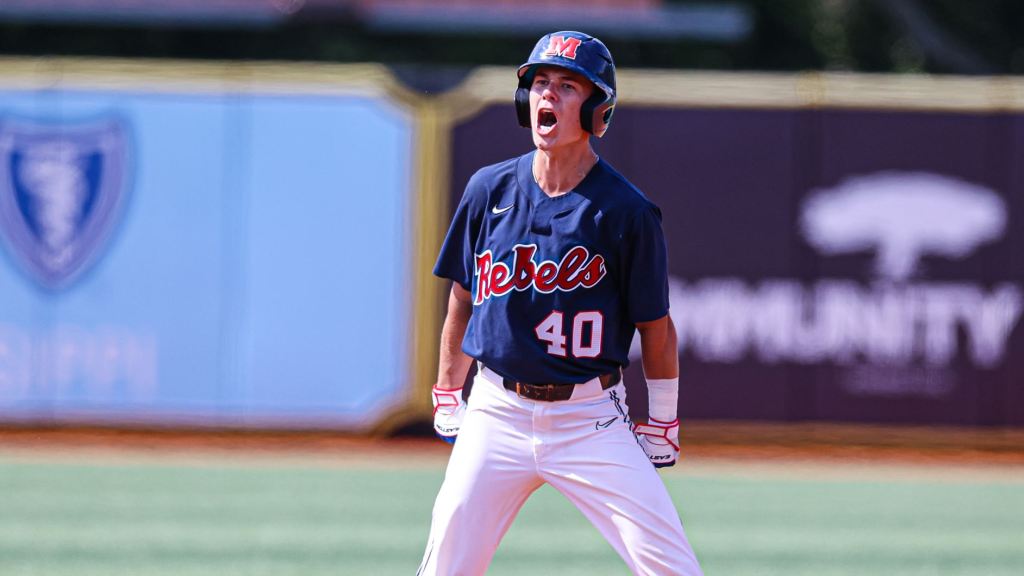 Ole Miss third baseman Garrett Wood celebrates after hitting an RBI double in the fourth inning of the Rebels' 10-0 win over Southern Miss in game one of the Hattiesburg Super Regional on Saturday, June 11, 2022. (Josh McCoy/Ole Miss Athletics)

HATTIESBURG, Miss. – When teams continue to play as their seasons move into June, there are always players who step up and make a difference. For Ole Miss as it heads into day two of the Super Regional, one of those in recent weeks has been Garrett Wood.

The senior from Claremore, Oklahoma had seen limited playing time in his two seasons at Ole Miss—until recently. And he has proven to be valuable in his role.

Playing at third base, Wood was a positive factor in the Miami Regional and also in game one of the Super Regional. He reached base four times against Southern Mississippi in the Rebels’ 10-0 game one victory on Saturday. He’s reached base in seven of his last nine at-bats.

Wood’s game participation numbers are almost identical in his two seasons as Ole Miss, although this season obviously continues. In 2021, the 5-foot-11, 175-pounder played in 22 games, starting two, mainly at second base.

This season he has, so far, appeared in 24 games, starting two of them, with his role at third base in recent games a vital part of recent weeks.

He’s playing more now, and the Rebels would likely not be in the position they are had he not, especially with his obvious productivity. But it isn’t just in games that Wood is a positive force for his team.

“Man, he lifts the spirits, pushes the guys in practice, always has a smile on his face, and always brings a ton of energy,” Bianco continued.

Wood’s background might not have been all that familiar to Rebel fans prior to his arrival in Oxford in the fall of 2020. He was a four-year letterwinner for head coach Jim Sherl at Claremore High School, hitting .375 as a junior with nine doubles, two triples, one home run, 43 runs scored, 34 RBI and 12 stolen bases, and as a senior hit .376 with five doubles, one triple, one home run, 39 runs scored, 23 RBI and seven stolen bases.

Wood was a Class 5A All-State player in Oklahoma and helped lead Claremore to back-to-back regional titles and an appearance in the state title game in 2017. A good athlete, he also played basketball in high school.

Wood is having a finish to remember as a college player for the Ole Miss Rebels. He’s doing his part when his team needs him most.

“It’s all hands on deck,” Bianco said. “We’re in a Regional, and T.J. McCants gets hurt. We throw (Wood) out there. A guy that’s usually thought of as a defensive replacement has put a ton of good at-bats together over the last few games.

“I’m really happy for him. Good things happen to good people, and certainly you’re seeing that in this case.”