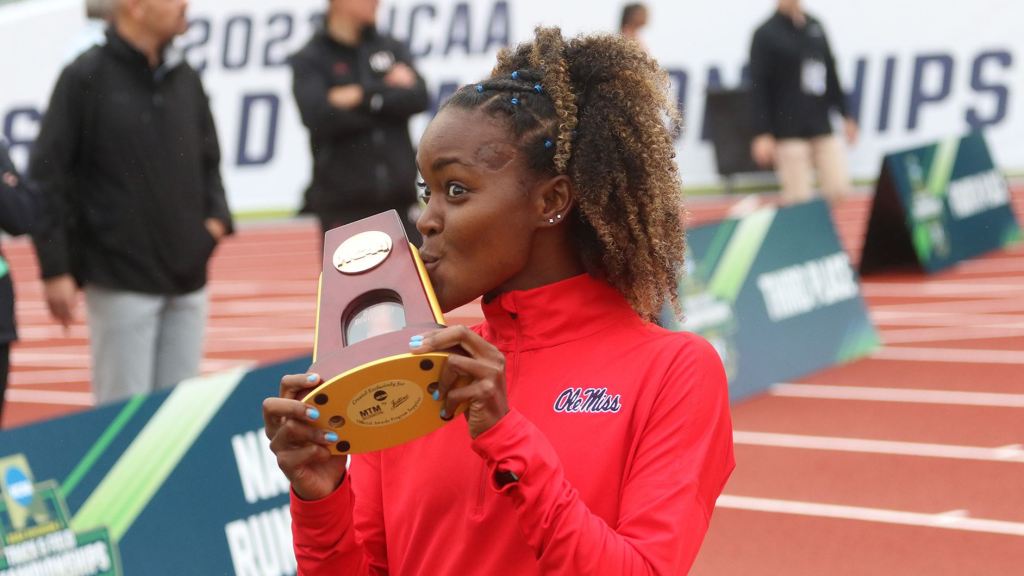 EUGENE, Ore. – This time, it was Sintayehu Vissa’s turn. In a near mirror-image race of her NCAA runner-up performance in the mile, Vissa flipped the script and emerged the victor by two tenths of a second to become the first Rebel woman to ever win an NCAA individual title on the track to wrap up a successful stay for Ole Miss at the 2022 NCAA Outdoor Championships on Saturday.

Vissa lost the indoor mile title to Colorado’s Micaela Degenero, and down the final stretch it was those two yet again in a dead heat for the national title. Degenero attempted to duplicate her successful race strategy from indoors with a furious final 400 of 61.21, but Vissa was right there with her on a final lap of 61.91 herself. In the final stretch, though, it was Vissa’s final burst and a lean at the line that gave her a two-tenth victory at 4:09.42 to Degenero’s 4:09.62. Vissa was composed and near the front of the pack for the entire race before that mad dash to the finish line, splitting 2:09.99 over her final 800 in addition to that fast final 400.

“I mean, you know, indoor I lost,” Vissa said. “(Degenero) left me shocked, and I couldn’t catch some time, so when I saw her I was like, I don’t want it to repeat again. So I told her, I gave her a hug and said, Sorry, it was revenge.”

With her victory, Vissa is the 11th NCAA Outdoor champion and the 24th total in the combined history of the Ole Miss men’s and women’s track & field. Additionally, Vissa is just the fourth Rebel woman to ever win an NCAA Outdoor title, joining Brittney Reese (long jump, 2008), Raven Saunders (shot put, 2016) and Janeah Stewart (hammer, 2018). Additionally, Vissa is the first Rebel woman – regardless of season – to win an NCAA title on the track, and the first individual winner on the track outdoors in the combined program since Barnabas Kirui won the 2007 steeplechase title.

Vissa is also now the eighth runner in SEC history to claim the NCAA women’s 1500-meter title, the first since 2016. She is also just the sixth in conference history to complete the SEC indoor mile, SEC outdoor 1500 and NCAA outdoor 1500 sweep.

Her performance today caps an extraordinary season for Vissa, who earned three First-Team All-America honors on the track, scored 18.75 NCAA points, and won the first three SEC women’s titles in Ole Miss history in the mile, 1500 and distance medley relay. She also was the first Rebel to ever earn All-America honors in cross country last fall, finishing 33rd at the national meet to help lead the Rebel women to a program record 10th-place team finish.

Speaking of team scores, Vissa’s heroics today, combined with Jalani Davis’ sixth-place performance in the hammer on Thursday, give the Rebel women 13 total points – good for a tie for 19th place overall. This is the first time in program history that the Ole Miss women have finished top-20 in all three seasons, with this 19th-place finish joining program records in cross country (10th) and in the indoor season (tie for sixth).

With the collegiate season wrapped, Ole Miss now looks ahead to the U.S. Outdoor Championships, which will be held here at Hayward Field on June 23-26.