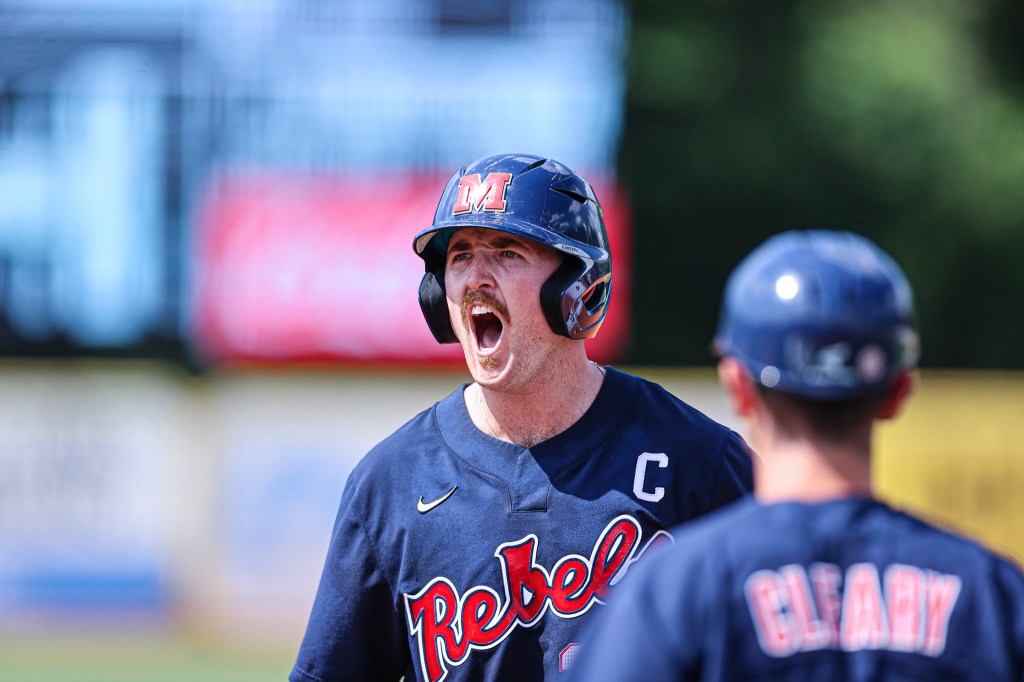 Ole Miss first baseman Tim Elko celebrates after hitting an RBI single in the third inning of the Rebels' 10-0 win over Southern Miss in game one of the Hattiesburg Super Regional on Saturday, June 11, 2022. (Josh McCoy/Ole Miss Athletics)

HATTIESBURG, Miss. — Tim Elko will be remembered in Oxford long after he hangs up his uniform.

The three-time captain’s name already appears all over the Ole Miss baseball record books, and he now has a chance to establish a claim as the greatest player to ever don the red and blue.

His two-hit, three-RBI performance against No. 11 Southern Miss in game one of the Hattiesburg Super Regional on Saturday also moved him into a tie with Jason Huisman for second all-time on the school’s single-season RBIs list and ninth on the career RBIs leaderboard.

But the Tampa, Fla. native isn’t interested in setting individual records or racking up the personal accolades—he wants to win a national championship.

“I just want to win,” Elko said after the Coral Gables (Fla.) regional. “I just try to do that every single day—whatever I can do.”

The Captain said “it’s cool” to set new school records in an interview with ESPN after the regional final, but added that he has his sights set on securing the first national championship in the 129-year history of Ole Miss baseball.

The Rebels nearly missed the tournament altogether after dropping 16 out of 25 games in the middle of the season, but Elko said the team never lost faith in their ability to turn it around and make a solid postseason run.

“We knew the whole season that we had a great team and sure—we had a stretch where we weren’t playing our best baseball but we never doubted ourselves, never pointed fingers, just continued to believe in ourselves,” he said.

Ole Miss now sits just one win away from securing their first College World Series appearance since 2014, and Elko and company are eager to prove that this team, which many wrote off after a 7-14 start to SEC play, has what it takes to win it all.