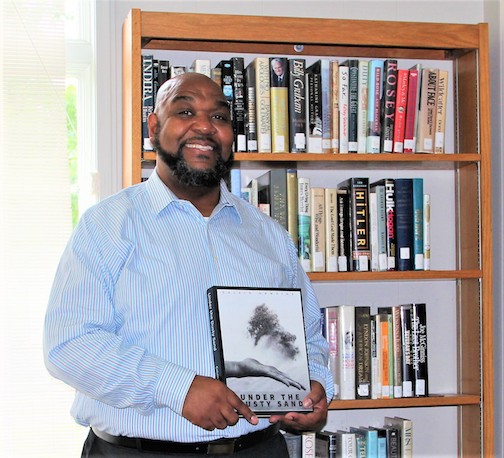 Author Calvin Harris of Water Valley will reveal “Under the Dusty Sands,” a book detailing the origins of African Americans in Yalobusha County. (Photo: Calvin Hawkins)

Where many are planning the weekend activities of Juneteenth, Calvin Hawkins will be able to tell the story of where it all began for African Americans in Yalobusha County, Mississippi.

Hawkins will introduce his project/book, “Under the Dusty Sand,” to many viewers from 10 a.m. to 3 p.m. Saturday, June 18 at the Fountain Square located in Water Valley, Mississippi.

This event will feature the three African American women who integrated Coffeeville High School in 1967, the History of Yalobusha County, the history of the Railroad, and many artifacts will be on display.

The public is invited to attend.

“[I have] always had the dream of learning more about his ancestors,” said Hawkins.

A Mississippi State University graduate majoring in Education and working with children and families for 27 years, he never thought that he would launch a milestone in his career as a County Historian.

But in the spring of 2012, Hawkins would begin his journey researching the beginning of how African Americans began in Yalobusha County and, 10 years later, he would compile that research into “Under the Dusty Sands.”

According to Hawkins, this book will tell readers the history of the beginning of African Americans in the North Mississippi county to the integration of the schools.  The content is broken down to all “The First”.

It will also include the life of many outstanding leaders and entertainers such as: Cordia King Stuart, one of the original fashion fair models in the world and the first African American woman to appear in a national advertising campaign for Women of Color; businessman James Goodwin, founder and editor of the oldest African American newspaper in Tulsa, Oklahoma;  Charlie Lewis, outstanding sculpturer which made a bust of Henry Ford; and Lloyd Gaines, a Civil Rights activist that played a key role in integration.

Hawkins is the President of the Blackmur Library and a member of the Yalobusha County Historical Society, Mississippi Historical Society and Phi Beta Sigma Fraternity, Inc.  He serves as Senior Pastor at United Missionary Baptist Church in Coffeeville, Mississippi. He is married to Mary Polk Hawkins and has three sons: Lopakus, Deterry and Tyler.

“Under the Dusty Sand” is now available on Amazon.com.