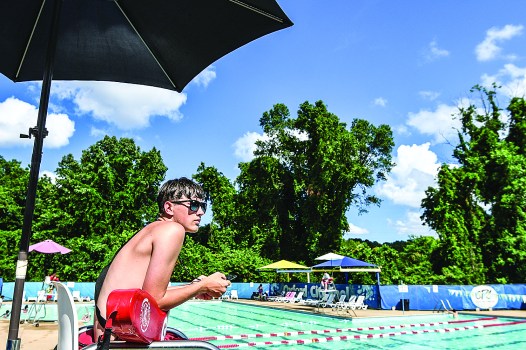 Lifeguard Logan Bay looks out over the Oxford swimming pool on Tuesday, June 13, 2017. The pool will open for the season on May 26. (Photo/Bruce Newman) 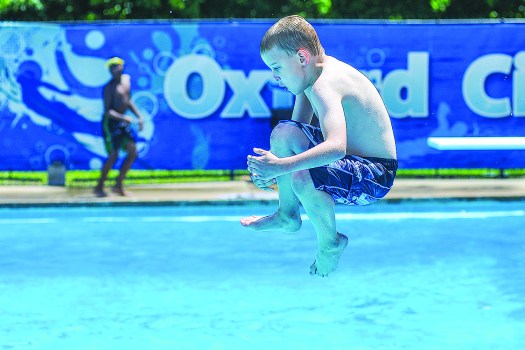 Peyton Champion goes off the diving board at the Oxford City Pool last year. The pool opens on May 27 for the summer. (Photo/Bruce Newman) 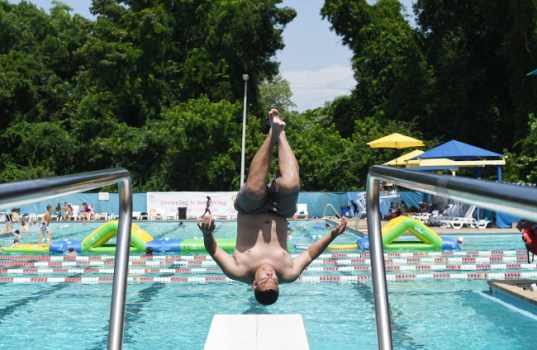 Efren Rivera does a flip off the diving board at the Oxford Swimming Pool in Oxford, Miss. on Monday, June 11, 2018.

Like millions of others in the region, Mississippians are braving extreme temperatures as a heat wave rolls across the nation.

In the past week, Lafayette County was placed under six Heat Advisories warning residents to exercise caution in the face of triple-digit temperatures and heat index values. And those above normal hot conditions will most likely continue into July, said weather officials.

On Wednesday, Oxford recorded a temperature of 99 degrees Fahrenheit with the heat index peaking near 105 degrees over much of the Midsouth.

According to the National Weather Service, the heat is creating expanding areas of “Abnormally Dry” over the Midsouth, relative to last week. A large portion of Lafayette County is included in those areas.

“Expect this trend to continue, with above normal temperatures and below-normal rainfall for the last week of June,” stated the NWS.

Residents are being advised to exercise caution and stay hydrated.

Drink plenty of fluids, stay in an air-conditioned room, stay out of the sun, and check up on relatives and neighbors. Young children and pets should never be left unattended in vehicles under any circumstances. Take extra precautions if you work or spend time outside. When possible reschedule strenuous activities to early morning or evening.

Know the signs and symptoms of heat exhaustion and heat stroke. Wear lightweight and loose-fitting clothing when possible.

To reduce risk during outdoor work, the Occupational Safety and Health Administration recommends scheduling frequent rest breaks in shaded or air-conditioned environments. Anyone overcome by heat should be moved to a cool and shaded location.

A heat stroke is considered an emergency and you are advised to call 911 should one occur.

But for some, it is a part of their job to brave the hot weather and they have to be more mindful.

Oxford Park Commission Aquatics Director Jamie Chandler said the safety of her lifeguard team at the Oxford City Pool is her number one priority.

“We take safety breaks every hour,” Chandler said. “Now that the heat index has gotten over 100, we’ll start going into extended safety breaks.”

When temperatures are more reasonable, lifeguards are issued 10-minute breaks every hour and are allowed to jump in the pool and cool off. However, the extreme weather conditions bump those 10 minutes up to 15 and Chandler said she stresses hydration and proper protection.

“I stress sunscreen because they need to be vigilant about that,” she said. “Water. Lots and lots of water. I give them popsicles and I get stuff for them specifically to make them keep cool.”

“It is hot and, although they are at the pool, that water is not cool,” she said. “We add water to it to cool off but when it gets to temperatures that high, it’s like bath water. It’s a normal thing and not anything we can control.”

“Other than the fact that it’s hot as blazes and it’s something that we cannot control, we haven’t had any real issues.”

If anything, the hot weather makes the pool more appealing to the community.

According to Oxford Park Commission Community Relations Director John Davis, the Oxford City Pool has received a record number of visitors since its reopening.

On the pool’s opening day, 139 came to the pool. The OPC also recorded 197 visitors on Memorial Day and the pool had 232 visitors on Saturday, June 11.

The pool also receives visits from the OPC’s youth group, the local Boys & Girls Club and the YMCA and other summer youth camps in the area. With the addition of camps, the numbers can reach over 400 pool visitors in a day.

“We’re back with no restrictions,” said Davis. “Two years ago we were completely shut down and last year we were still in the mindset of restrictions. Now, it’s more of [what] I call a pre-COVID/post-COVID. It’s more of a pre-COVID moment, especially now. You see it with the numbers.”

Since its opening, the pool had only one rain day where it could not stay open. On June 10, the weather was unusually cool and drizzly which discouraged many visitors.

“It was our slowest day and we had 16 people come to the pool and swim,” said Chandler.

However, cooler days do not seem to be in the near future. Chandler advises the public to be extra careful in these conditions.

“People need to stay hydrated, wear sunscreen and wear sun protection. All those things” she said. “It’s important. If you can get inside and take breaks, do all those things. Don’t overdo it.”