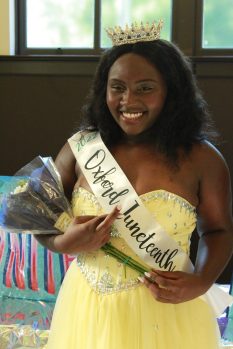 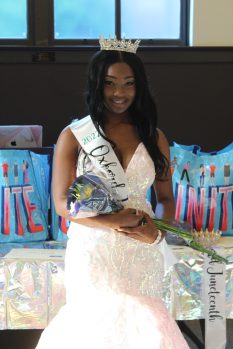 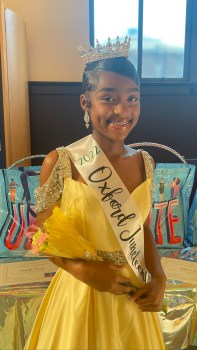 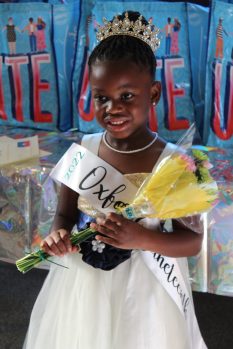 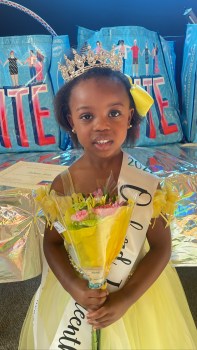 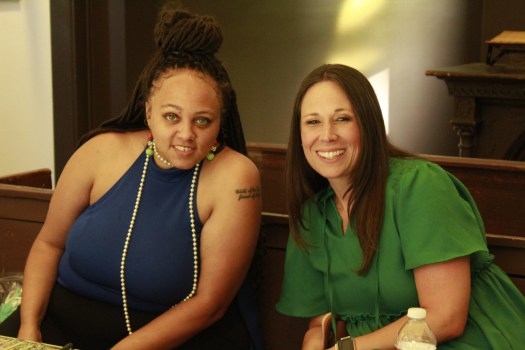 The Oxford Juneteenth Pageant was presented by Jeweled Event Company and Erin Smith, director of CASA of North Mississippi, and Timber Heard, the creator of Talitha Kumi Jewels, acting as judges.

Five Oxford girls ages 4 to 14 were recognized for their excellence and accomplishments in the community.

Pageant title winners received a cash prize, a crown, a sash created by Danielle Maury, flowers and a plaque. Participants also received a gift bag from the Oxford Juneteenth committee.

Robinson, Teen Miss Oxford Juneteenth, is no stranger to pageants.

“I’ve been doing pageants since I was a baby, and once I heard about this opportunity to participate in something for my hometown, it warmed my heart because pageants are my passion,” said Robinson.

It feels amazing to have won a title that represents her community, she said. In addition to her title award, Robinson also won the Best Dressed award, as decided by Smith and Heard.

“I’m happy that I had an opportunity to be in this pageant and to get crowned. This community means a lot to me so this pageant is one thing that caught my heart,” said Robinson. “And it does help me with boosting confidence towards what I want to do in life and it’s going to help me get out there and face more challenges.”

Facing challenges head-on is one reason why Robinson will pursue a career in law.

“I do plan on graduating earlier to go to law school so I can complete my dream of being a lawyer,” she said.

After competing in the Oxford Juneteenth Pageant, Robinson will go on to compete in the Miss Magnolia Pageant in Vicksburg for the crown.

“I feel very confident in it,” Robinson said. “It’s going to be a tough fight but I’m willing to accept the challenge and show off what I’ve been doing. I have faith in myself that I will win.”

According to Miss Oxford Juneteenth Alexis Wilks, believing in yourself is the most important thing to do. As a female football player on an 8th-grade boys’ football team, Wilks is familiar with doubt — whether it comes from others or herself— but she continues to push herself.

“Since I play football, I have been doubted before,” Wilks said. “I’d say if you have any dreams or ambitions, just go for it and don’t be scared because you only get one life. So make the most out of it that you can and keep praying to God.”

Wilks’ ambition drives her to get the most out of life and participate in different events such as pageants.

“You don’t see football players dressing up, wearing a pretty dress and a crown,” she said. “It’s nice for me to get out of the stereotypical boy activities especially since I’m a female football player. This is a time for me to dress up, have fun and not have to worry about anything.”

Wilks has experience in leadership and pageants as well but specifically chose to participate in the Oxford Juneteenth Pageant to express her interest in Oxford and African-American history.

“What drew me to the pageant was my love for the community and for Black history,” she said. “I wanted to go ahead and do it because why not?”

Now, Wilks has become part of the history that she loves by becoming the first-ever Miss Oxford Juneteenth.

“It is a very special moment and a very proud moment for me knowing that I am the first Miss Oxford Juneteenth,” she said. The experience was made all the more enjoyable with the company of Robinson, her long-time friend.

“We’ve known each other since the first grade, so I didn’t think ‘She’s competition,’” Wilks said. “She’s a very close friend. In most pageant systems, you don’t really have friends but for me and Andrea it was a good time.”

“I like to be a representative and go out and get to know this community better,” Wilks said. “It’ll be great to go out and become a part of the community.”