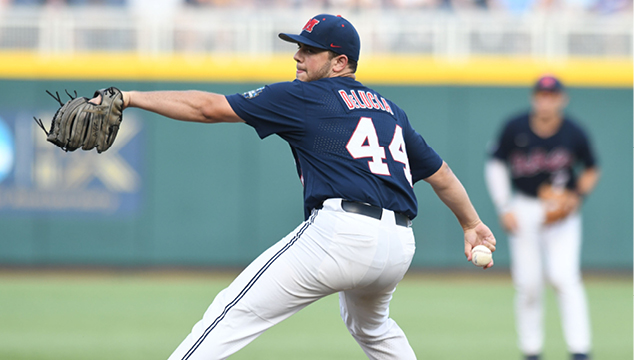 OMAHA, Neb — Ole Miss baseball moved one step closer to securing the first national championship in school history on Saturday as they knocked off No. 14 Auburn 5-1 in their first College World Series game since 2014.

The Rebels’ pitching staff continued to dominate in the postseason, surrendering just one run on four hits to an Auburn lineup that terrorized opponents throughout the season.

The offense also rose to the challenge with five runs in the first six innings that put the game out of reach in the middle innings.

Dylan DeLucia was spectacular on the mound for Ole Miss, recording his second double-digit strikeout performance of the postseason while allowing just one run on four hits in 7 2/3 innings of work.

The Rebels’ ace pounded the strike zone all night long, pitching to contact and using the large dimensions of Charles Schwab Field to his advantage as he mowed through the Tigers’ lineup for three complete turns.

“I just wanted to keep my pitch count low,” DeLucia said. “That was literally my gameplan today—throw it in the zone, let them hit it and if they don’t hit it, good for me but just let them put the ball in play and let my defense work for me.”

“I thought Dylan was as terrific as he’s been, not just down the stretch but probably since we’ve injected him into the rotation,” said head coach Mike Bianco. “I thought tonight—against what we consider a really good Auburn offense—I thought he mixed his pitches so well, the fastballs in and out, a ton of pitches for strikes. He was able to move the slider to get some punchouts, he was able to elevate his fastball he was able to do just about anything tonight.”

Sophomore reliever Josh Mallitz also excelled in the win, recording four straight outs after taking over with two outs in the eighth inning.

The young righty has not given up an earned run since April 23, and has surrendered just five hits in his last 14 1/3 innings on the mound.

“Mallitz—of course at the end—has been as good as anybody that we’ve run out there,” Bianco said. “[He’s] been good and I think the [reason] is a lot of strikes.”

The Rebels have found the timely hits all postseason, and continued to do so in this one as they handed DeLucia a lead before he even stepped on the mound.

First baseman Tim Elko sparked the offense in the top of the first with a two-out single to right center before left fielder Kevin Graham roped a double down the line in left that put two runners in scoring position for designated hitter Kemp Alderman.

Alderman came through with a two-run single to left that allowed both runners to score easily and gave Ole Miss a 2-0 lead in the opening frame.

They tacked on another run with an opposite-field home run by Graham with two outs in the third.

The solo shot also marked the 100th long ball of the season as they eclipsed the triple-digit home run mark for the first time in program history.

“It all falls back on us not executing pitches like we need to,” Auburn reliever Carson Skipper said when asked about the Rebels’ success with two outs. “A lot of their hits were just pitches that we left up and met their barrels with… they’re a good offensive team, but at the same time we’ve got to execute pitches the way we need to.”

Ole Miss continued to deliver two-out magic in the sixth when center fielder T.J. McCants drove in right fielder Calvin Harris with a two-out single to left that extended the lead to 5-1.

“With two outs, even with nobody on, there’s a lot of inning left,” Graham said. “Those two-out runs can be huge. They can be back breakers.”

Rebels move into winner’s bracket for first time since 1956

Saturday’s win marked the first time since 1956 that the Rebels came away victorious in the first round of the College World Series.

Ole Miss had lost four straight CWS-opening game dating back to 1964, but secured a crucial victory in the opening round to set up a date with Arkansas in the winner’s bracket on Monday.

The Rebels dropped two out of three games to the Razorbacks on the road back in late April, but Graham said that isn’t a concern for the team as they try to exact some revenge against their SEC-West rivals.

“At this point in the year it doesn’t matter who you’re playing. Everybody is good. Everybody can beat everybody. We’re just ready to go out and compete again.”