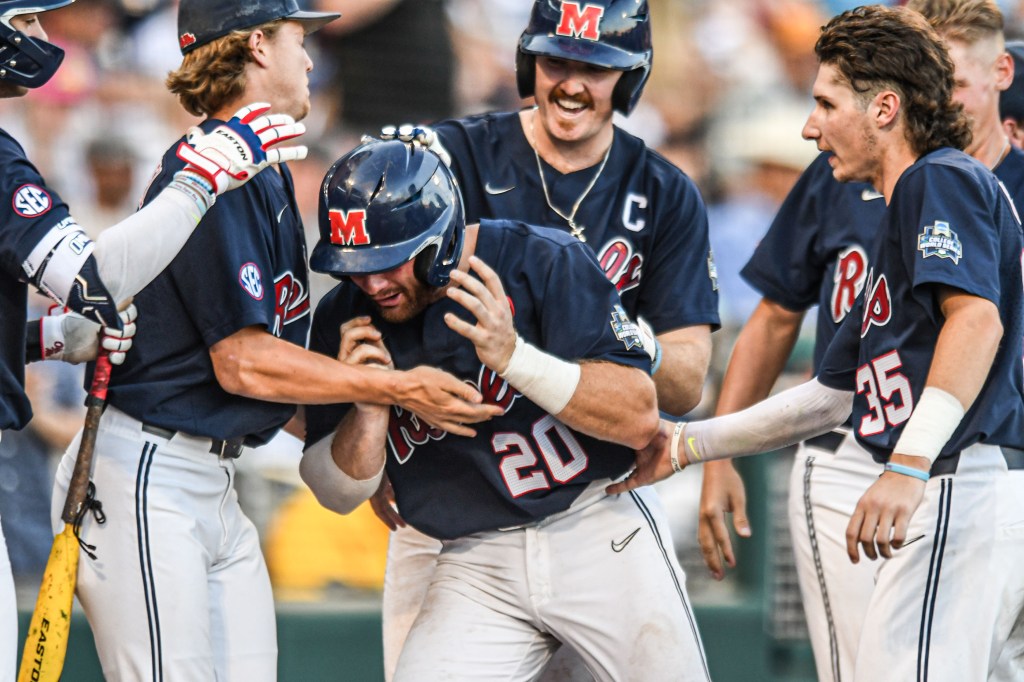 Ole Miss right fielder Calvin Harris is swarmed by teammates after hitting his second home run of the season in the fifth inning of the Rebels' 13-5 win over Arkansas in game eight of the College World Series at Charles Schwab Field in Omaha, Neb., on Monday, June 20, 2022. (©Bruce Newman)

The Rebels secured the third trip to the College World Series semifinals in program history on Monday with a 13-5 beatdown of Arkansas that saw sophomore utility man Calvin Harris put together the best performance of his college career to date.

The Peosta, Iowa native went 3-for-4 against the Razorbacks, driving in four runs and crossing the plate twice himself in the biggest game of his life.

He grounded out to second in the top of the second inning before recording three straight hits, including a two-run home run in the fifth that pushed the lead to 8-3.

The 363-foot shot marked just the second long ball of the season for Harris, who missed nearly the entire month of March due to a strained oblique before struggling through the second half of the season.

He has bounced back in a big way in the postseason, going 11-for-22 with six RBIs and six runs scored after posting a .146 batting average over the final 29 games of the regular season.

“When we started conference play, he wasn’t playing regularly. That can happen offensively,” said head coach Mike Bianco. “He struggled a little bit on offense, struggled offensively and in conference play. The last few weeks he’s been terrific, and we needed it right at the right time.

Harris was not the only Rebel who stepped up when the team needed it most however.

Third baseman Garrett Wood reached base three times in the win over the Razorbacks, going 1-for-3 with a pair of walks while crossing the plate twice.

The senior defensive specialist, who played sparingly throughout the season before starting four of the past five games for the Rebels, is now hitting .300 in the postseason with an RBI and five runs scored.

Center fielder Justin Bench also excelled in the win, recording the second four-hit game of his collegiate career to jump-start the Rebels’ offense from the leadoff spot.

He nearly had five hits on the night, but was robbed of a base hit in the third inning on a miraculous catch by Arkansas’s Kole Ramage that looked more like self-preservation than good defense.

“We had a good scouting report,” Bench said when asked about his performance. “We thought they were going to staff it, which they did. We knew what we were doing, what our scouting report was—just [to] go up there and have tough at-bats and try and get each pitcher out of the game, which is what we did.”

The offensive explosion provided plenty of cushion for starter Hunter Elliott, who got into trouble in the first couple innings as his defense struggled to make plays behind him.

The Freshman All-American gave up a hit to Arkansas leadoff hitter Braydon Webb in the top of the first on a ball that tipped off the glove of shortstop Jacob Gonzalez and bounced into center field for a single.

He followed that up with back-to-back strikeouts before forcing a fly ball to left that appeared to get him out of the inning, but was mishandled by left fielder Kevin Graham as he struggled to find the ball in the glaring midwestern sun.

The miscue allowed Webb to score from first, cutting the Razorbacks’ deficit in half after the Rebels struck for two in the top of the first.

Elliott’s defense failed him once again in the second, when Arkansas second baseman Robert Moore reached on an error by Gonzalez to leadoff the inning.

The Razorbacks jumped on the opportunity, launching a double to right to put two runners in scoring position before driving them both in with back-to-back groundouts.

The young lefty settled in in the third, retiring 13 out of the next 15 batters he faced as the Rebels’ pulled away in the middle innings.

He finished his night in the seventh after surrendering just one earned run on six hits while recording four strikeouts in 6 1/3 innings of work.

“I think I’ve had a good amount of run support lately,” Elliott said. “It’s easier to pitch with a lead obviously than being down runs or tied [and] having to make every single pitch perfect. It allows you to flood the strike zone and let whatever happens happen.”

He handed the ball off to fellow true freshman Mason Nichols, who tossed 1 2/3 innings of no-hit ball before passing the baton to closer Brandon Johnson in the ninth.

The Rebels’ senior stopper struggled to locate pitches in his first appearance since June 5, giving up a double and a home run that cut the lead to 13-5.

He settled his nerves after a brief mound visit, forcing a groundout to second followed by a strikeout of Webb as Ole Miss secured a crucial win to put themselves in position to reach the College World Series final for the first time in program history.

“This was a big game. I think either losing the first or the second one, man it’s tough,” Bianco said. “It’s tough to get through because you’ve got to play four days in a row and you’ve got to win the next three just to get to the championship series.”

The Rebels will face the winner of Tuesday night’s elimination game between Arkansas and No. 14 Auburn, and will have two opportunities to advance to the final after starting 2-0 in the tournament for the first time since 1956.