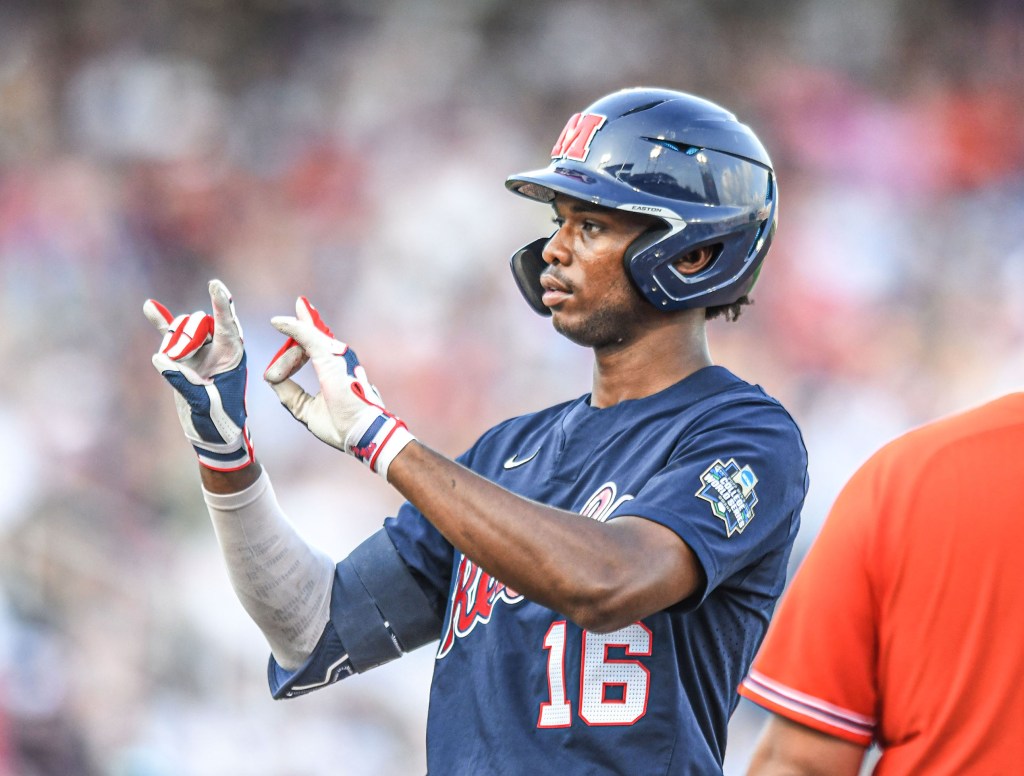 Ole Miss center fielder T.J. McCants gestures to the dugout after hitting an RBI single in the sixth inning of the Rebels' 5-1 win over No. 14 Auburn in game four of the College World Series at Charles Schwab Field in Omaha, Neb., on Saturday, June 18, 2022. (©Bruce Newman)

Ole Miss has won 14 of their last 17 games, including six straight to start the NCAA tournament.

Much of the credit goes to the Rebels’ remarkable pitching turnaround, but they have also enjoyed consistent production from some unlikely sources which has jump-started the offense and given the pitching staff plenty of run support.

Senior infielder Garrett Wood recorded his first start of the season in the Coral Gables (Florida) regional final against Arizona, going 1-for-3 with two walks and two runs scored in a 22-6 blowout victory.

The performance earned him two more starts against No. 11 Southern Miss in the Hattiesburg Super Regional, where he delivered the biggest hit of his collegiate career at a crucial moment to give the Rebels a 3-0 lead in game one.

“I kind of got thrown into the fire, which is what you love if you’re not an everyday guy—you’re just waiting for your opportunity to get in there and compete,” Wood said.

Wood is not the only end-of-the-bench guy to step up for Ole Miss when it mattered most.

Sophomore right fielder Calvin Harris, who started the season as the Rebels’ backup catcher, is hitting .444 in the postseason with a pair of RBIs and four runs scored.

Harris has started 10 games in right, three in left, and 11 at catcher for Ole Miss this season, becoming a plug-and-play option for a lineup that struggled with inconsistency for long stretches of the regular season.

“I’m just trying to come in and do whatever I can to help the team win,” said Harris. “Wherever they tell me to go that day—I’ll go out there, put that glove on and do the best I can.”

Teammates are not surprised by the improved play from the bottom of the lineup, saying it fits in to the Rebels’ next-man-up mentality.

“It’s always next man up,” said center fielder T.J. McCants. “We had a bunch of guys step up and they played really well so that was exciting to watch them do well.”

Ole Miss will need all the help it can get when they face off with SEC West foe Arkansas on Monday with a trip to the College World Series semifinal on the line.

The Rebels dropped two out of the three games to the Razorbacks on the road in late April, and now hope to exact some revenge as they attempt to secure the first national title in program history.