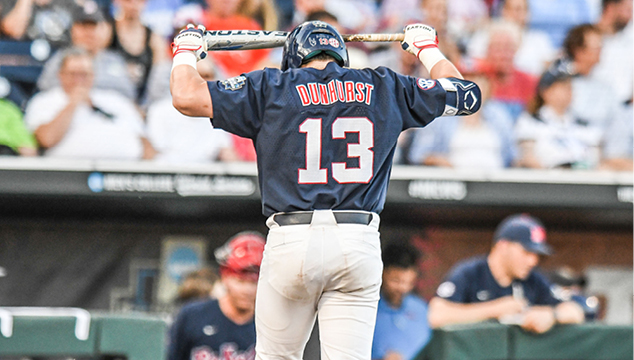 Ole Miss catcher Hayden Dunhurst raises his bat in frustration after striking out for the third time in the Rebels' 3-2 loss to Arkansas in game 12 of the College World Series at Charles Schwab Field in Omaha, Neb., on Wednesday, June 22, 2022. (©Bruce Newman)

OMAHA, Neb. — Ole Miss made it as close as possible.

After struggling through the first eight innings of their College World Series semifinal matchup against Arkansas, the Rebels loaded the bases with no outs in the bottom of the ninth as they trailed by two runs.

What followed next was all too familiar for fans who have followed this team all season.

First, pinch-hitter Hayden Leatherwood and right fielder T.J. McCants struck out in back-to-back at-bats. Then, center fielder Justin Bench hit a ball that came agonizingly close to squeaking through the gap between short and third, but was stopped by Arkansas shortstop Jalen Battles deep in the hole, forcing second baseman Peyton Chatagnier to stop at third as Bench legged out an infield single.

With the winning run standing in scoring position on second, shortstop Jacob Gonzalez stepped into the box with a chance to send the Rebel to the first College World Series final in program history and etch his name into Ole Miss lore.

The talented young hitter patiently waited for his pitch, working his way into a 2-2 count before lining a fastball to left that brought the Rebel fans in Omaha to their feet before sending them slumping back into their seats as it nestled directly into the glove of Razorbacks left fielder Jace Bohrofren.

The Ole Miss faithful let out a collective groan, staring in disbelief at the field in front of them as their hope turned to sorrow with one swing of the bat.

The Rebels, who entered the contest on a seven-game winning streak, fell 3-2 to the Razorbacks in a game where the offense failed to provide their pitching staff with virtually and support.

Senior lefty John Gaddis was excellent in his first start on the mound since April 9, tossing five complete innings and giving up two runs on four hits.

He pounded the strike zone all night long, pitching to contact and letting his defense make plays behind him in the biggest stadium in college baseball.

The former Texas A&M-Corpus Christi ace handed the ball over to reliever Jack Washburn in the sixth, who gave up one run on two hits while striking out three batters in two innings of work before passing the torch to Jack Dougherty in the eighth.

Dougherty was even better in his third appearance of the postseason, allowing two hits and a walk while striking out three Razorbacks over two shutout innings.

“I thought he was terrific,” Bianco said of Gaddis’s performance. “We have a lot of confidence in our offense and this is—again—more credit to [Hagen] Smith and [Evan] Taylor on their side, but if you would have told me that was going to be the result—that we were going to run Gaddis, Washburn and Dougherty out there… you think you’ve got a good shot of winning those baseball games.”

The quality pitching performance proved moot as the Rebel lineup went ice-cold for the first time this postseason.

Ole Miss managed just five hits on the night, three of which came from designated hitter Kemp Alderman, who went 3-for-4 with a home run and two runs scored in the defeat.

The rest of the lineup combined to go 2-for-28 with 13 strikeouts as they were shut down by the Razorbacks’ talented pitching staff.

Starter Hagen Smith had the Rebels number all game, pounding the zone early in the count with fastball after fastball before unleashing a devastating slider that left Ole Miss’s hitters swinging at air.

“We had five hits, Kemp had three of them. Obviously their pitchers were throwing really well today but it is what it is,” Chatagnier said.

The Rebels dropped their first game of the NCAA tournament after making a miraculous undefeated run to the semifinal, and will now have one more chance to reach the College World Series final in a winner-take-all elimination game against their SEC foes tomorrow at 3 p.m.

“We’ve been playing this kind of ball for a long time—even before the postseason,” Chatagnier said when asked how the approach changes with their backs against the wall. “It kind of felt like it was must-win situations in all of our games. We have a lot of older guys in our lineup and this is nothing new to us. We’re going to come out firing.”