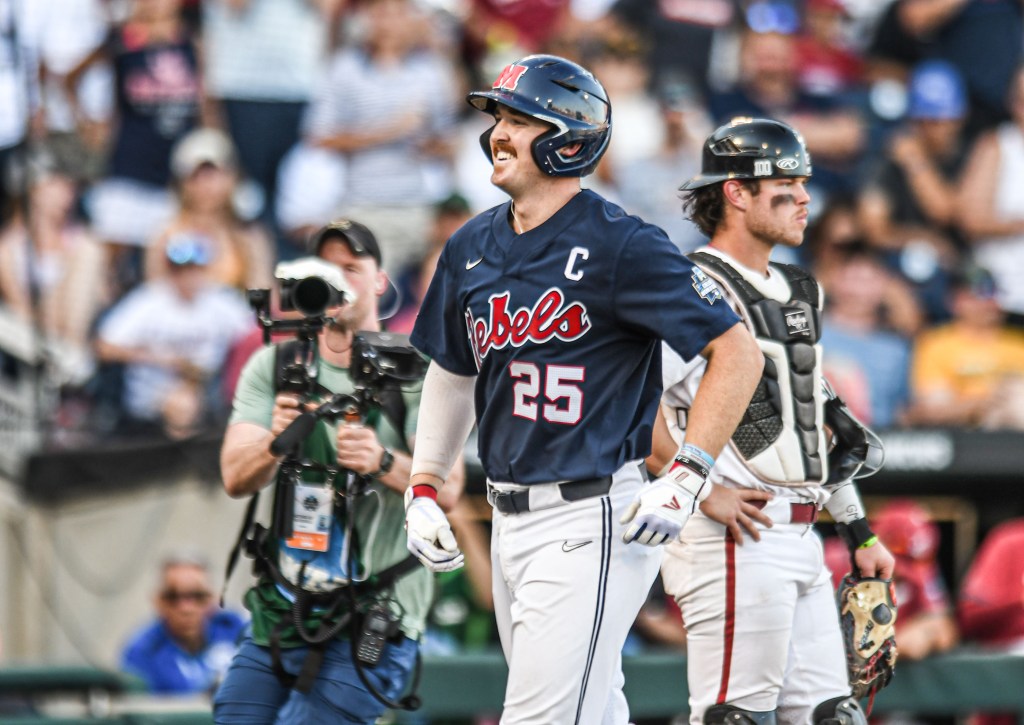 Ole Miss first baseman Tim Elko smiles after hitting a home run in the second inning of the Rebels' 13-5 win over Arkansas in game eight of the College World Series at Charles Schwab Field in Omaha, Neb., on Monday, June 20, 2022. (©Bruce Newman)

OMAHA, Neb. — Ole Miss is one win away from the first College World Series final in program history.

The suddenly red-hot Rebels are 7-0 in the NCAA tournament after sneaking in as the final team in the field of 64, ripping through opponents with dominant pitching and timely hitting.

Head coach Mike Bianco and company take on Arkansas on Wednesday for the second time in three days after coming away with a 13-5 win on Monday to advance to the semifinals for just the third time in the 139-year history of Ole Miss baseball.

They will have two opportunities to advance to the final after starting 2-0 in Omaha for the first time since 1956, when they defeated New Hampshire and Bradley before being bounced from the tournament with back-to-back losses to Minnesota and Arizona.

Senior John Gaddis will draw the start on the mound for Ole Miss, his first start since being removed from the starting rotation in early April following a 12-10 loss to Alabama.

The former Texas A&M-Corpus Christi has been used sparingly since then, making six appearances out of the bullpen and amassing a 3.29 ERA over 13 2/3 innings.

He made his only appearance of the postseason in the Rebels’ 22-6 win over Arizona in the Coral Gables (Florida) regional final, where one unearned run on two hits while recording four strikeouts.

He is now asked to toe the rubber in what will be the biggest game of his college career against an Arkansas lineup that is averaging 11 runs per contest so far in Omaha.

The Razorbacks moved into the winner’s bracket with a 17-2 win over No. 2 Stanford before falling to Ole Miss in a lopsided, 13-5 game on Monday.

They staved off elimination with another offensive explosion against Auburn on Tuesday night, striking for eight runs in the first four innings en route to an 11-1 blowout victory.

The Rebels hope the left-handed Gaddis will provide an edge for them on the mound against the Razorbacks, who struggled against left-handed pitching throughout the regular season.

Gaddis performed well in his only appearance against Arkansas this season, giving up a walk and two hits over 2 1/3 shutout innings in a 4-3 loss to the Razorbacks on May 1.

Ole Miss will also have a full bullpen at their disposal after starters Dylan DeLucia and Hunter Elliott worked deep into the game in each of their respective outings.

The game is currently scheduled for 6 p.m. CT, and will be available on ESPN and the Ole Miss Radio Network.