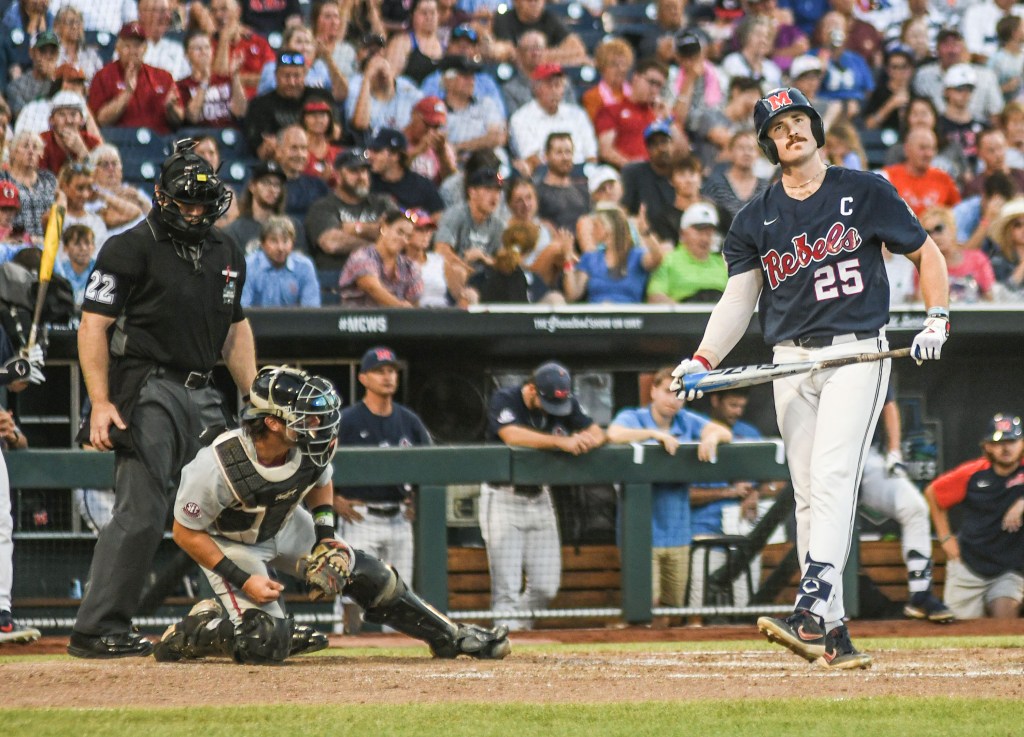 Ole Miss first baseman Tim Elko shakes his head in dismay after striking out against Arkansas in Game 12 of the College World Series at Charles Schwab Field in Omaha, Neb., on Wednesday, June 22, 2022. (©Bruce Newman)

OMAHA, Neb. — Regardless of the outcome of today’s game, this Ole Miss team will be remembered in Oxford for a long time.

Most fans wrote the Rebels off in early May when they fell to 7-14 in conference play after losing two out of three games on the road to then-No. 4 Arkansas.

Ole Miss had lost three straight SEC series at that point, and sat in a tie with Kentucky and Missouri for the worst record in conference play.

That’s when everything turned around.

You’ve all heard the story by now: the Rebels won eight of their final 10 games in the regular season, snuck into the NCAA tournament, then went on a miraculous seven-game winning streak to reach the third College World Series semifinal in program history.

So what went wrong last night?

In short, Arkansas pitched to Ole Miss’s weaknesses. They pounded the strike zone with fastballs early, taking advantage of the Rebels’ patience at the plate before enticing them to swing at breaking balls outside the zone.

The Rebs played right into their hands, taking the strikes and falling into unfavorable counts time and time again before being forced to protect with two strikes. Ole Miss saw a first-pitch strike in 23 out of their first 31 at-bats, and never made the adjustment as they continued to watch early fastballs cross the plate.

Now, they are on the brink of elimination for the first time this postseason as they face the Razorbacks for the third time in the last four days with a trip to the first College World Series in program history on the line.

While they haven’t faced elimination yet in this tournament, having their backs against the wall is nothing new for this Ole Miss team.

Their surprising run at the end of the regular season came in large part because there was no more room for error. The Rebels needed to win nearly every game down the stretch if they had any hope of making the postseason, and they are confident that experience prepared them well for today’s winner-take-all game.

“We’ve been playing this kind of ball for a long time—even before the postseason,” said second baseman Peyton Chatagnier. “It kind of felt like it was must-win situations in all of our games… this is nothing new to us.”

Both teams will have their aces on the mound Thursday, as junior righty Dylan DeLucia faces off against Arkansas’s Connor Noland in what figures to be another low-scoring battle.

The difference in the game will be which team is able to get to the opponent’s bullpen first after each team used up plenty of arms yesterday.

The Rebels still have their best reliever fresh in Josh Mallitz, but will likely want to limit his usage if they have a lead in the late innings in order to preserve him for the championship series.

That means true freshman Mason Nichols and former starter Derek Diamond will likely be asked to eat up plenty of innings in what will be the biggest game of their lives.

Head coach Mike Bianco stressed that the key to victory in elimination games is to stay positive, saying his team is taking a glass-half-full approach rather than getting down on themselves after the loss.

“If you would have asked four or five months ago in February, would you like this opportunity to have your ace on the mound in a winner-take-all to get you to the championship series, everybody would say yes,” the Ole Miss skipper said. “So rather than woe is us, how about looking at what a great opportunity we have.”

First pitch in the winner-take-all elimination game is scheduled for 3 p.m. CT. The game will be available on ESPN2 and the Ole Miss Radio Network.