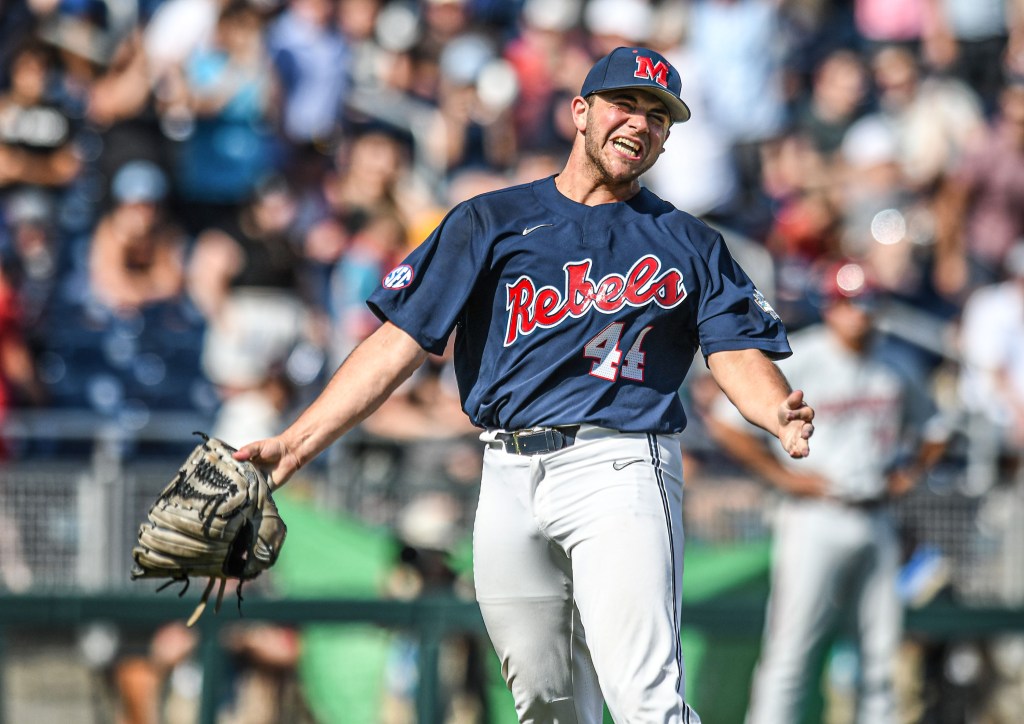 Ole Miss pitcher Dylan DeLucia throws his glove in the air after pitching a complete-game shutout in a 2-0 win over Arkansas in Game 13 of the College World Series at Charles Schwab Field in Omaha, Neb., on Thursday, June 23, 2022. (©Bruce Newman)

OMAHA, Neb. — Dylan DeLucia walked calmly back to the mound.

The Ole Miss ace had already thrown 102 pitches on the afternoon, but walked confidently out to the mound for the ninth inning with a chance to complete a shutout and send Ole Miss to the first College World Series final in program history.

The Rebels junior ace didn’t waste any time, forcing back-to-back groundouts on seven pitches for the first two outs of the inning.

He stood stone-faced on the mound as Arkansas right fielder Chris Lanzilli stepped into the box as the last chance for the Razorbacks.

DeLucia continued to attack the strike zone, throwing two straight fastballs to Lanzilli to get ahead in the count 0-2.

After bouncing a slider in front of the plate, he went back to the fastball—throwing a waist-high two seamer on the inside part of the zone that blew right past Lanzilli for strike three.

DeLucia let out an emphatic scream as Lanzilli swung through the pitch, pumping his fist in the air before tossing his glove about 20 feet into the air as catcher Hayden Dunhurst sprinted out to the mound to embrace him.

The players in the dugout poured onto the field and mobbed DeLucia on the mound while the seven other players already on the field converged in shallow center for a quick celebration before joining their teammates on the infield.

“I just went out there—just kind of put as much zeros [up] as I [could],” DeLucia said of his performance. “Last time me and [Arkansas starter Connor Noland] had this matchup… it was a dogfight. This time it was a dogfight. It was just really cool to have that again.”

The Port Orange, Florida native put on the best performance of his life in the biggest game in program history, throwing a 113-pitch, complete-game shutout to send the Rebels to their first College World Series final.

He surrendered just four hits and zero walks while striking out seven batters—including three in the closing innings as he retired the final seven batters of the game.

The shutout marked the sixth time in program history that the Rebels have blanked an opponent through nine innings in the postseason, three of which have come this year alone.

It also marked the first complete-game shutout for Ole Miss in the postseason since Lance Lynn threw a two-hit shutout against Southern Miss in game three of the 2007 Oxford regional.

For DeLucia, it was just another day at the ballpark where he got to do what he does best: put up zeros.

“I just looked up and saw all those zeros going into the eighth and I was just like, ‘it’s my time to finally finish this game,'” he said. “It’s been an interesting, fun ride. Coach [Bianco] always says enjoy the ride… and that’s what I’ve been doing, just taking every chance I get and kind of running away with it, not looking back.”