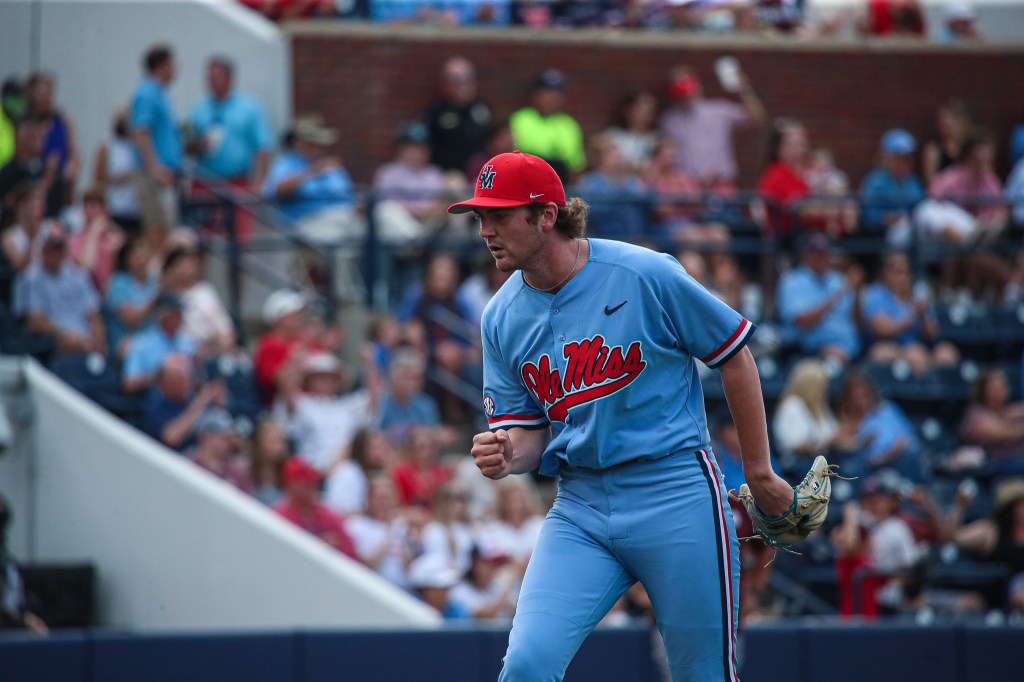 Ole Miss pitcher Jack Dougherty celebrates after a strikeout in the seventh inning of the Rebels' 7-6 loss to Mississippi State on Sat., Apr. 23, 2022. (Ole Miss Athletics)

OMAHA, Neb. — Ole Miss baseball announced on Friday that Jack Dougherty will start in game one of the College World Series final on Saturday against Oklahoma.

The sophomore righty threw two scoreless innings of relief in his last appearance against Arkansas on Wednesday, giving up a walk and two hits while striking out three batters.

His last start came on March 26 against Tennessee, when he gave up six runs on eight hits in 3 2/3 innings in a 10-3 loss to the Volunteers.

He has pitched fairly well out of the bullpen since then, posting a 4.03 ERA in 11 relief appearances.

He has not allowed a run since April 30, when he surrendered three in a 6-3 loss to Arkansas.

Freshman All-American Hunter Elliott will start for Ole Miss in game two on Sunday after giving up one earned run in a win over Arkansas on Monday.

The team has not announced a potential starter for Monday’s game three, but all signs point to ace Dylan DeLucia making his second consecutive start on short rest should the two teams split the first two games of the series.

Game one is scheduled to begin at 6 p.m. CT on Saturday. Sunday’s game two is scheduled for 3 p.m. CT, while game three will take place at 6 p.m. CT if necessary. All three games will be available on ESPN and the Ole Miss Radio Network.