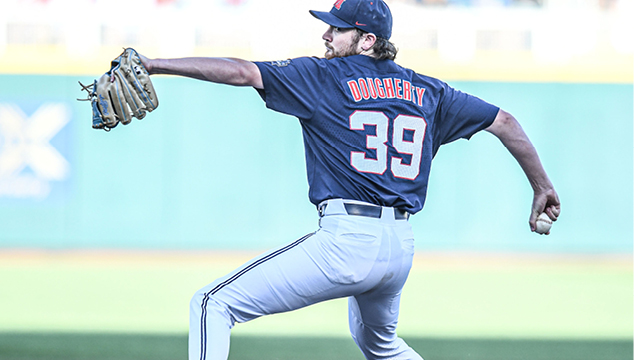 Ole Miss sophomore Jack Dougherty delivers a pitch in the Rebels' 10-3 win over Oklahoma in game one of the College World Series final at Charles Schwab Field in Omaha, Neb., on Saturday, June 25, 2022. (©Bruce Newman)

OMAHA, Neb. — Ole Miss could not have asked any more of Jack Dougherty.

The sophomore righty was masterful on the mound for the Rebels in their 10-3 victory over Oklahoma in game one of the College World Series final on Saturday, throwing a perfect game through five innings as he shut down the Sooners’ lineup with a lethal fastball-slider combination.

“I think I was only fastball-slider today, but Coach B grabbed me before the game and said, just be you. Go out, attack with your fastball, get ahead in counts, and just pitch like you pitch, and you’ll be successful,” Dougherty said.

Dougherty retired the first 15 batters he faced as he became the first player in history to remain perfect through at least four innings of a College World Series finals game in his first start since March 26 against Tennessee.

The Collierville, Tennessee native also tied a career-high with five innings pitched before unraveling in the sixth inning as he surrendered three straight hits and a walk before head coach Mike Bianco brought in freshman reliever Mason Nichols from the bullpen with the bases loaded and no outs in the sixth.

“Obviously, Jack had a tremendous day. I thought [he had] super fastball command, super slider command. He just lived ahead in the count,” Bianco said.

“I thought he could deliver and land some sliders early,” Bianco said. “[I] didn’t know he was going to walk out there and throw five perfect innings like that.”

Ole Miss now sits just one win away from the first national championship in program history with two chances to secure the title.

They will hand the ball to Freshman All-American Hunter Elliott in game two on Sunday, and will likely turn to DeLucia for the deciding game three should the series reach that point.