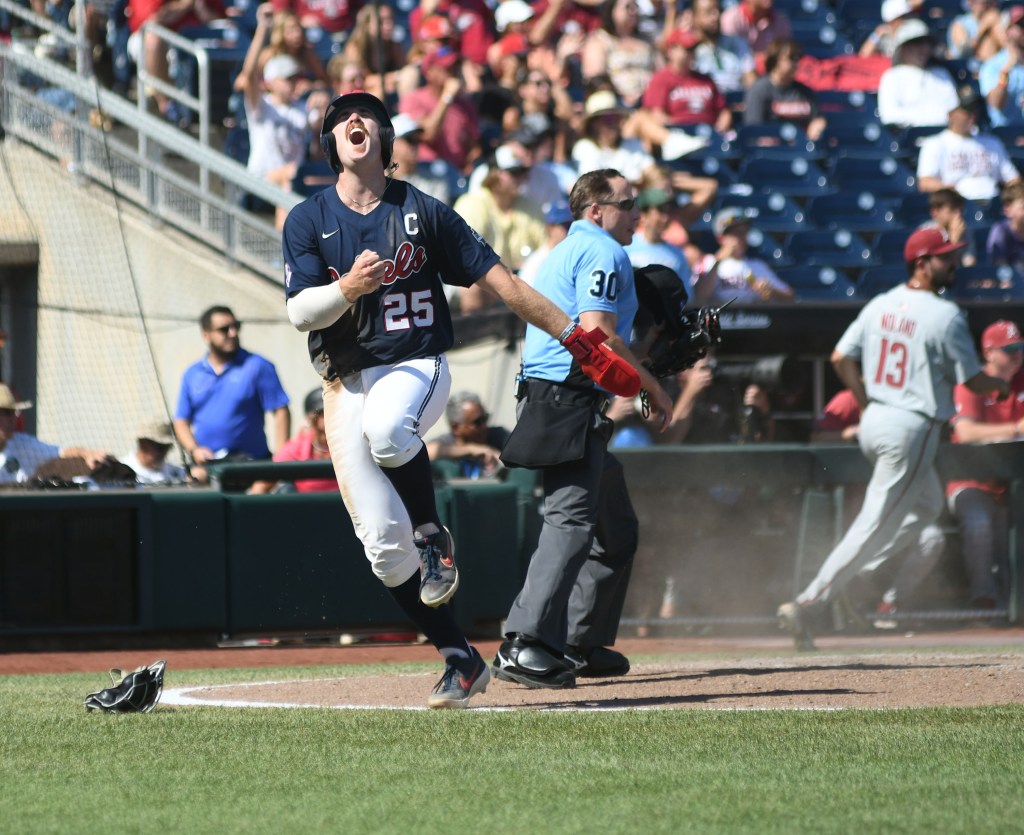 Ole Miss first baseman Tim Elko celebrates after scoring on a single by right fielder Calvin Harris in the seventh inning of the Rebels' 2-0 win over Arkansas in Game 13 of the College World Series at Charles Schwab Field in Omaha, Neb., on Thursday, June 23, 2022. (©Bruce Newman)

OMAHA, Neb. —  Ole Miss baseball takes on Oklahoma on Saturday in game one of a matchup between the two hottest teams in college baseball as they square off with a national championship on the line.

The Rebels (40-23, 14-16 SEC) have become the story of the tournament after sneaking in as the final team in the field of 64 before winning eight out of nine games to reach the first College World Series final in program history.

They took the most difficult road possible to reach the tournament, jumping out to a top-five national ranking before losing 16 out of 25 games to fall to the bottom of the SEC standings.

Even when they sat in a tie for the worst record in the conference, the team never lost faith.

Head coach Mike Bianco said that continued faith in their ability to compete is exactly what led to this remarkable cinderella run.

“I think it came from belief, belief in themselves first—that they were good players, but then also belief in one another that we’re a good team and we can do this, especially if we stick together,” Bianco said.

Players echoed those sentiments, saying they never doubted their ability to compete with the best.

“I mean, we were 7-14 at one point. I think it’s a lot about belief,” said utility infielder Justin Bench. “I think all 40 guys we had on our team at the time, we never stopped believing. We’re here now, and the NCAA put us in. Now we’re playing for a national championship.”

Now, they stand on the precipice of history as the first team in Ole Miss history with a chance to take home a national title. For a school with one championship in women’s golf and a disputed championship in football, this weekend is perhaps the most important moment in the university’s athletic history.

“We’ve just been focusing one game at a time, but you can’t help but look around and see that you’re playing for the World Series,” Bench said. “It’s a speechless moment for all of us.”

The Rebels take on the Sooners in game one of the series at 6 p.m. on Saturday, with game two scheduled for 2 p.m. on Sunday. Game three will begin at 6 p.m. on Monday if necessary. All three games will be available on ESPN and the Ole Miss Radio Network.