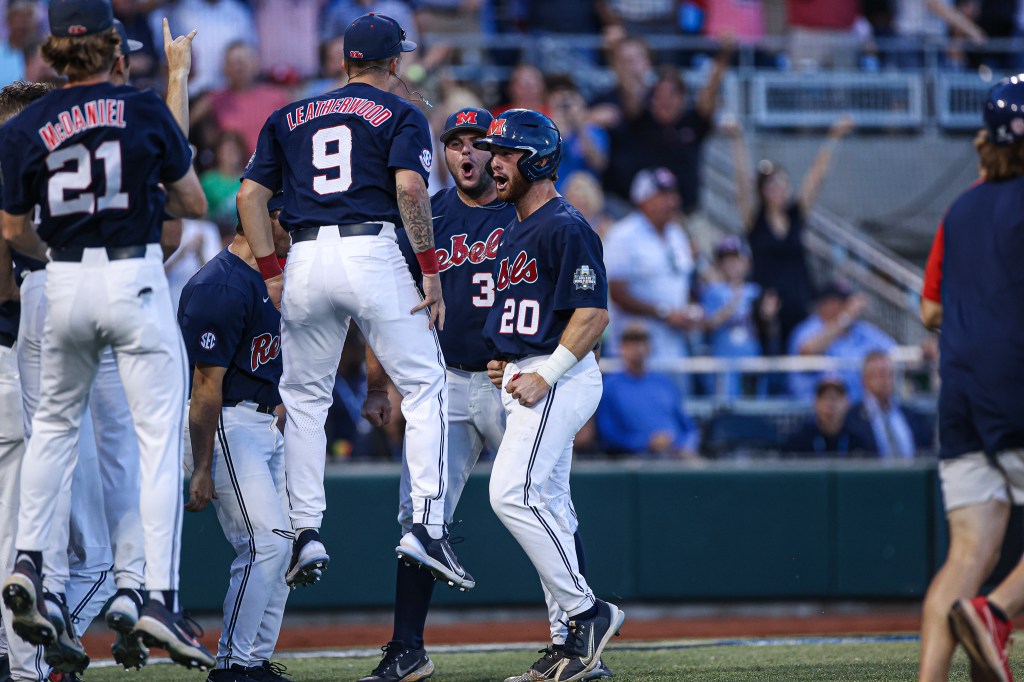 Ole Miss right fielder Calvin Harris (20) is mobbed by teammates after hitting a home run in the eighth inning of the Rebels' 10-3 win over Oklahoma in game one of the College World Series final on Saturday, June 25, 2022. (Josh McCoy/Ole Miss Athletics)

OMAHA, Neb. — Ole Miss secured a crucial victory in game one of the College World Series final on Saturday with a 9-3 win over Oklahoma.

Sophomore Jack Dougherty was masterful on the mound for the Rebels, throwing a perfect game through five innings before allowing three straight hits to start the sixth.

The Collierville, Tennessee native recorded six strikeouts through five innings as he retired the first 15 batters he faced.

The shutdown performance marked the first time in history that a pitcher threw four innings of perfect ball in a College World Series finals game.

The young righty was aided by plenty of run support as the Rebels struck for four runs in the first three innings before exploding with six runs in the final two innings to put the game out of reach.

Five of their 10 runs came on the long ball—including all four runs in the eighth inning as they became the first team to hit back-to-back-to-back home runs in the College World Series since LSU in 1998.

They now sit just one win away from the first national championship in program history with true freshman Hunter Elliott on the mound for game two of the series on Sunday.