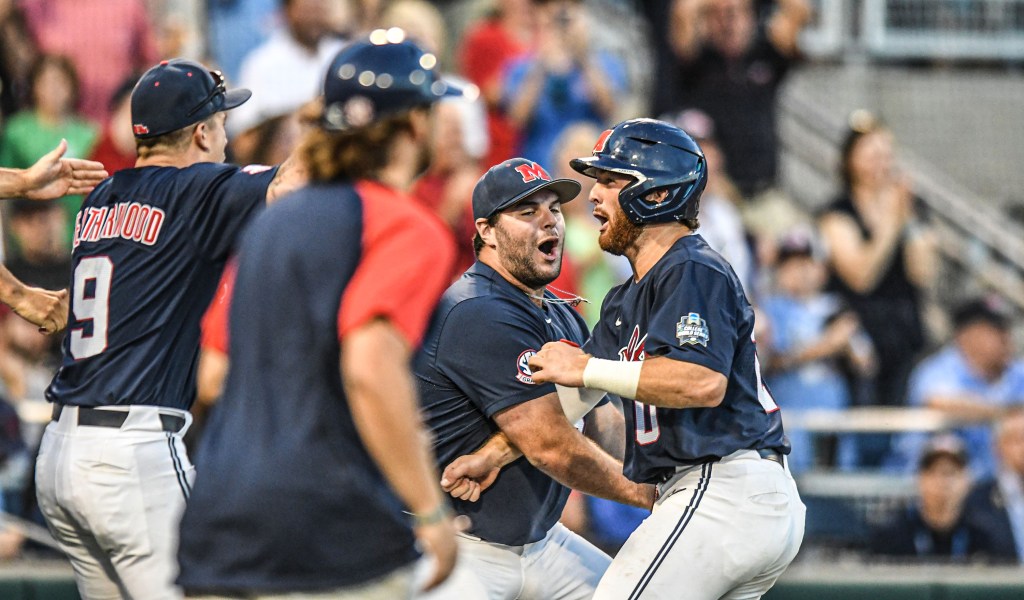 Ole Miss right fielder Calvin Harris is mobbed by teammates at the plate after hitting a home run in the eighth inning of the Rebels' 10-3 win over Oklahoma in game one of the College World Series final at Charles Schwab Field in Omaha, Neb., on Saturday, June 25, 2022. (©Bruce Newman)

OMAHA, Neb. — The inning looked like it was over.

Ole Miss had two on with no outs in the eighth after designated hitter Kemp Alderman and second baseman Peyton Chatagnier hit back-to-back singles to lead off the inning before catcher Hayden Dunhurst botched a sacrifice bunt attempt and Chatagnier was caught stealing at third for the second out of the inning.

Now with just a runner on second and two outs it appeared the Rebels had squandered a golden scoring opportunity.

Then the bats came alive.

First, center fielder T.J. McCants roped a line drive down the line in right that landed in the visitor’s bullpen for a two-run home run that extended the Rebels’ lead to 6-2.

Then, right fielder Calvin Harris absolutely blasted a belt-high fastball 430 feet into the stands in right center before third baseman Justin Bench followed that up with another laser that just cleared the wall in left for the third home run in as many at-bats.

The dugout exploded, streaming out onto the field to swarm Bench as he crossed home plate.

“It was really, really cool to watch,” said first baseman Tim Elko, who also left the yard in the game with a solo home run in the third inning. “I think I was in the hole for the last one. Just taking in all the fans going crazy in the outfield, and it was a really cool experience.”

Ole Miss hit back-to-back-to-back home runs for the third time this season as they became the first team to hit three straight home runs in a college world series game since LSU accomplished the feat in 1998.

The Rebels also hit three straight long balls in an 8-7 win over UCF on March 4 and a 10-7 loss to Mississippi State on April 22.

“Somehow that’s not the first time that’s happened. I don’t know what it is with this team and doing that, but when they get hot they get hot,” said sophomore pitcher Jack Dougherty.

The offensive explosion came at the perfect time as Oklahoma crept back into the game in the middle innings before the historic feat provided a gut-punch that proved too much to overcome.

“I thought that kind of knocked the wind out of their sails. It would for anybody, but I thought the big one was T.J. just because of the way the inning looked like it was going to end,” said head coach Mike Bianco.

Ole Miss carried the offensive explosion to a 10-3 win in a critical game one of their College World Series championship series against Oklahoma.

The Rebels will take on the Sooner in game two at 2 p.m. CT on Sunday, where they will have a chance to secure the first national championship in program history.