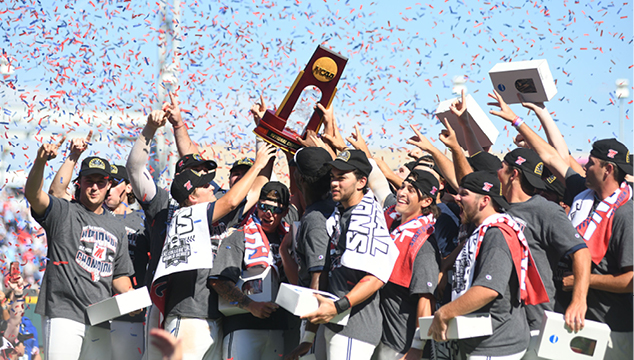 OMAHA, Neb. — Ole Miss is a national champion at last.

The Rebels’ baseball team defeated Oklahoma 10-3 and 4-2 in back-to-back games in the College World Series final to secure the first national championship in program history and the first title for Ole Miss in any major sport.

They enjoyed timely hitting and dominant pitching throughout their postseason run, outscoring opponents 82-23 in their 11 NCAA tournament games.

“It’s hard to put into words,” said first baseman Tim Elko. “Me and Kevin [Graham] and people that maybe could have gone, we came back one more year to play with the guys sitting up here with me and that were on the field today. We came back to play one more time as a team and go for the shot to win a national championship, and obviously we did that.”

Ole Miss got the timely hits all postseason, including on Sunday when they struck for three runs in the bottom of the eighth after falling behind in the seventh.

Center fielder T.J. McCants sparked the rally with a single to center after catcher Hayden Dunhurst struck out to lead off the inning.

Third baseman Justin Bench followed that up with a single to right on what appeared to be a hit-and-run play that put McCants in scoring position at third.

“It really wasn’t a hit and run,” said head coach Mike Bianco. “It was a steal by McCants and Bench poked a little line drive to right.”

The impromptu hit and run put runners on the corners for Ole Miss as shortstop Jacob Gonzalez stepped into the batter’s box with one out.

The Glendora, California answered the call—driving a single through the gap on the right side of the infield that scored McCants and allowed Bench to advance to third.

Gonzalez, who was 0-12 in his last 14 plate appearances entering Sunday’s contest, delivered his second key hit of the game after hitting a solo home run in the sixth inning that gave the Rebels a 1-0 lead.

The Ole Miss pitching staff continued their incredible run of dominance in Sunday’s win as Freshman starter Hunter Elliott pitched a gem through 6 2/3 innings before handing the ball off to the bullpen in the seventh.

The Freshman All-American retired 18 out of the first 20 batters he faced—breaking out his curveball for the first time in weeks and using it to attack the zone early in the count and keep the Sooners hitters off-balance.

The sharp-breaking curveball effectively set up his fastball, which he blew past batters later in the count with great success.

He finally got into trouble in the seventh when he surrendered a double followed by a walk and another fluke double that tied the game at one a piece and chased him out of the game.

Elliott handed the ball over to fellow true freshman Mason Nichols, who failed to record an out as he plunked a batter with a fastball before walking in the go-ahead run with the bases loaded.

Bianco called on senior lefty John Gaddis to get them out of the jam, and the Texas A&M-Corpus Christi transfer delivered with the biggest strikeout of his career to limit the damage and keep the score within one.

After the Rebels retook the lead in the bottom of the eighth, closer Brandon Johnson came in for the final three outs looking to close the door and secure the championship.

The senior stopper did just that—striking out the side in order to end the game and give Ole Miss their first NCAA-recognized national title in a men’s sport in school history.