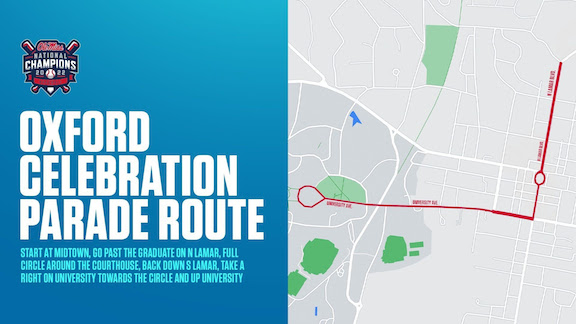 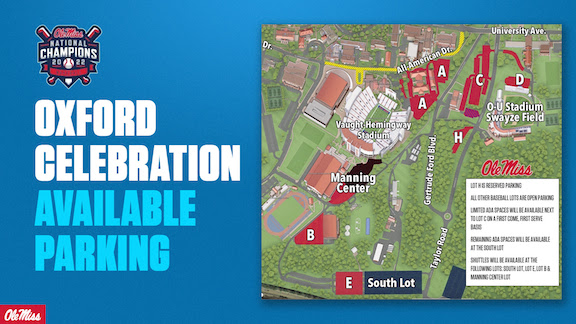 Ole Miss will celebrate the 2022 NCAA Baseball National Championship on Wednesday, June 29, with a parade through The Square that will culminate with an event inside Oxford-University Stadium/Swayze Field. 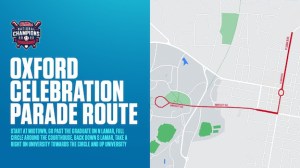 The parade will kick off at 5:15 p.m. CT. The route will begin at midtown, go past The Graduate on N Lamar, take a full circle around the courthouse, continue down S Lamar, take a right on University and end at the Lyceum.

The parade will include Rebel student-athletes and coaches, athletics and campus administrators, as well as other invited guests and honorees.

Once the parade has passed your location, fans are encouraged to make their way to Oxford-University Stadium/Swayze Field for a Championship Celebration. Gates at the stadium will open at 5 p.m. CT.

The ceremony at Swayze Field will begin at 6 p.m. and honor head coach Mike Bianco and the 2022 national championship Rebels who took down Oklahoma in Omaha to claim Ole Miss’ first-ever College World Series National Championship.

Fans will hear from coaches, student-athletes, team personnel and other special guests. 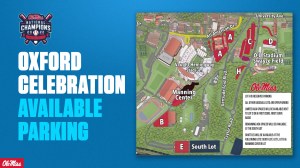 Lot A, Lot B, Lot ADA, Lot C, Lot D, lot e/south lot and the Manning lot will be open on a first-come, first-served basis for the championship celebration. ADA parking will be available at lot C- ADA and the South lot. A complimentary shuttle will be offered from the Manning Center, Lot B, Lot E, South lot and ADA lot.