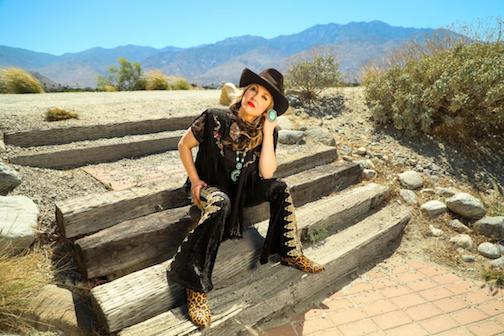 Country music singer Sunny Sweeney is set to perform at Proud Larry’s on Wednesday, July 6 at 8:30 p.m. for a night of music and fun.

The one-night performance will be Sweeney’s second appearance at the food joint and live music venue located at 211 South Lamar Boulevard.

“I’ve only played at Proud Larry’s one time but I enjoyed it a lot and the people that were there were so awesome,” said Sweeney. “We’ll have drinking songs and shooting songs. We have fun like go-out-party songs and we have girl-power songs. It’s a good mix of everything you know. I do have a couple of vulnerable [songs] that I will play but it’s a cool band of drums, bass guitar, a steel guitar and me, so it’ll be really fun.”

Sweeney will be joined by fellow country artists and long-time friend Erin Enderlin. Enderlin and Sweeney have been frequent songwriting collaborators for 15 years and work well together on stage, Sweeney told The Eagle.

“We are really great friends and she tours with us sometimes,” she said. “I feel like my fans really, really love her as an opener and she is one of the best country singers that you will ever hear. I always look forward to playing with her because I feel like our crowds match and you know, my crowd likes her. Her crowd likes me, so it works out really good.”

Sweeney will be playing the first single off her upcoming LP Married Alone, “A Song Can’t Fix Anything.” “That song can’t bring my mother back to life,” Sweeney sings at the song’s start, before recounting the many ways that music may be able to transport us to the past but can never fix it.

“My mom’s alive but again, the girl that I wrote that mom has passed away,” said Sweeney. Although the artist may not be able to relate to that particular lyric, she said the feeling of loss and grief is something everyone can relate to.

“It’s just one of those things where I feel like it’s pretty universal because it doesn’t even have to be your mom,” Sweeney said. “You can think of your aunt, your uncle, your cousin or your friend. It’s just the thought of losing someone you know.”

According to Sweeney, music has the power to remind you of a special person.

“Music is like a perfume,” she said. “When you walk through the mall and you smell somebody’s perfume, and all of a sudden you’re thinking, ‘Oh my god, this smell like my grandma or my uncle.’ Music and incense are two things that I feel like can really, really bring something back to you immediately.”

Though “A Song Can’t Fix Everything” is a slower, sadder track, the Married Alone LP covers a wide range of the emotional spectrum, leaping from upbeat and bold to slow and somber within the space of one track.

“I think it was Willie Nelson who said the one thing that brings all humans together is pain,” said Sweeney. “Every single human may not feel happiness, I mean I guess they would, but every single solitary human on Earth feels pain and loss— every one of them. That’s a cool way to look at it, in my opinion.”

Sweeney said music is the perfect medium for telling all types of stories. Singers can make fun, up-tempo songs but they can also explore vulnerable of their personal aspects of life.

“I’ve always been really, really into the story aspect of it,” said Sweeney. “Even when I was like a little kid, I remember listening to country and, and knowing that it was different than anything that actually tells like a story. There’s a beginning, a middle, and an end usually and some kind of resolution at the end of the song, whether it’s a good resolution or bad, but there is a resolution.”

“Then when I started doing music myself, I realized I can tell stories now. I just have to learn how to get into music. So I really did, I hope, carry that with me.”

Sweeney said all her songs stem from a story she knows. She likes to write songs that lean into an experience, whether it be her own or someone else’s.

“For me personally, when I started writing songs, I was kind of like, I just did what I knew how to do, which was only tell the truth,” she said. “If something had happened to me, or I heard a story from a friend, sister or my mom, or whatever, turning a real story into a song is a lot easier for me than just making one up. That’s how I like writing from experience.”