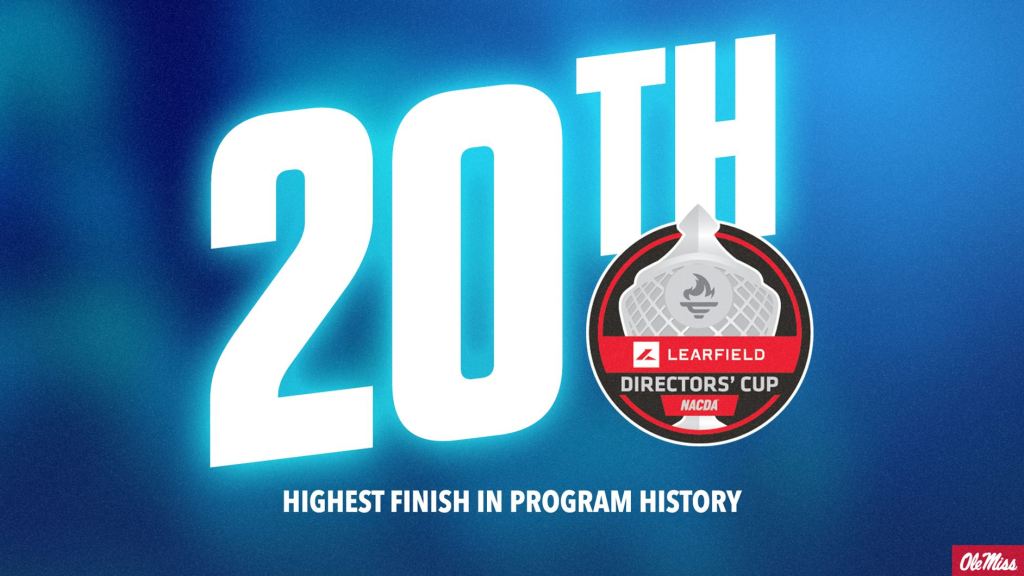 Points are awarded based on the institution’s finish in NCAA Championships, and for the second straight year, a spring national title led Ole Miss to a record finish at 852. Last year, the women’s golf team won the first outright NCAA team title in school history to propel Ole Miss to 22nd. This year, the Ole Miss baseball team’s historic College World Series title run vaulted the department into the top 20.

“It has been another historic year for Ole Miss Athletics, and we are setting a new standard for overall department excellence with the No. 20 ranking,” said Keith Carter, Vice Chancellor for Intercollegiate Athletics. “A second straight top-25 finish shows that our department will continue to compete and win at a championship level. It was incredible to see our baseball program bring a national title back to Oxford, and we can’t wait to see which group of Rebel student-athletes will bring home the next championship.”

Ole Miss totaled 852 points en route to the record finish, including 100 from the baseball national title—the final trophy of the year awarded by the NCAA. Also for the second straight year, the rifle team added the second-highest total to the board, tallying 80 after a fourth-place finish at the NCAA Championships. In total, 16 of Ole Miss’ 18 varsity sports competed in NCAA postseason play.

The ranking marks the highest finish ever for a school from Mississippi, with the previous best being last year’s 22nd-place finish. Prior to that, the state’s highest was the Rebels’ No. 38 rank following the 2017-18 campaign.

On the heels of three national championships this spring and four overall titles, Texas took home its second straight LEARFIELD Directors’ Cup. Both Texas and runner-up Stanford tied for seventh in the College World Series, with the Longhorns finishing the year with 1449.50 total points to Stanford’s 1352.25 points.

The Learfield Directors’ Cup was developed as a joint effort between the National Association of Collegiate Directors of Athletics (NACDA) and USA Today. Points are awarded based on each institution’s finish in NCAA Championships.