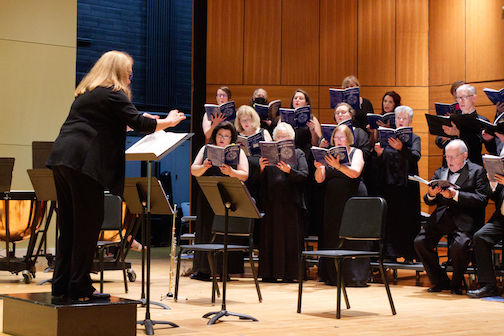 The Oxford Civic Chorus turned its spring season finale concert into a benefit for the victims of war in Ukraine, raising over $2,000. Submitted photo.

When the board and members of Oxford Civic Chorus decided to make the spring season finale concert a benefit for victims of the war in Ukraine, members were just hoping to find some way to help, and counting on the L-O-U community to step up. And that they did — the concert, “A Prayer for Ukraine,” raised $2,385.

“We were so moved by the outpouring of love and empathy for the Ukraine people shown by this community,” said board president Greg Mitchell.

OCC donated the entire amount to UNHCR, the UN Refugee Agency, a global organization dedicated to helping displaced people. UNHCR provides emergency aid and safe refuge for those forced to flee their homes, and assistance for people who relocate permanently or return to their homes. To date, more than 12 million people have been displaced by the war, according to BBC news.

Chorister Kevin Riehle was on the committee that researched and selected the organization to receive the donation. Riehle has more than 30 years academic and professional experience with the history, politics, and military capabilities of Russia and the former Soviet states. He took a special interest in Ukraine when his daughter was assigned to work there as a missionary in 2021.

“The members of Oxford Civic Chorus have little to offer to the millions of refugees created by the war in Ukraine,” Riehle said. “The one thing we do have, however, is our love of music and the joy music brings to others. We are grateful for the generosity of so many people who accepted the invitation to translate that joy into giving.”

Co-directors Debra Atkinson and Creighton Holder have announced the programs for the 2022-2023 season. The theme for the December concert is “Wintertide Awakes.” The spring concert will be a benefit for Memory Makers, a respite day program for people with dementia and their caregivers. For more information on Memory Makers, visit the website at www.memorymakers.org.

Oxford Civic Chorus, a 501(c)(3), has been inspiring singers, enriching community and expanding musical horizons since 1998. The choir gathers for weekly rehearsals, performs two concerts a year, and is available to sing at local events. Join, donate or learn more at oxfordcivicchorus.org and facebook.com/OxfordCivicChorus.