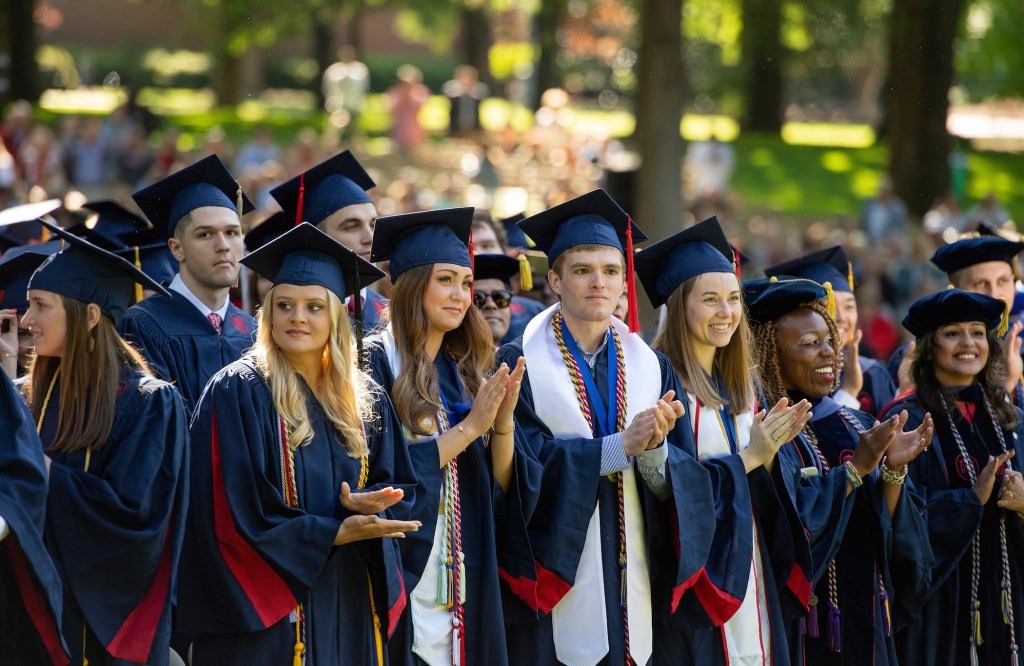 Members of the University of Mississippi's Class of 2022 celebrate Commencement in the Grove. The new Program for Accelerated and Advanced Degrees allows outstanding students to take graduate-level courses as undergrads and earn both a bachelor's and a master's degree in five years. Photo by Thomas Graning/Ole Miss Digital Imaging Services

Jack Dellinger, a May graduate of the University of Mississippi, was writing his thesis for the Sally McDonnell Barksdale Honors College when he made an astonishing discovery. Delving into a new book of essays by the subject of his thesis – Harvard law professor Adriane Vermeule – the Madison resident saw that several of their arguments overlapped.

Each had written a rebuttal to the critics who attacked Vermeule’s bold new ideas about constitutional originalism.

“I was blown away when I saw some of the essays,” Dellinger said. “I was afraid that people would think I was stealing Vermeule’s ideas because there was definitely a similarity between some of his arguments and mine – but I was relieved to see that my thesis stands on its own.”

Furthermore, Dellinger, a double major in philosophy and public policy leadership, realized that he was part of a cutting-edge philosophical controversy, and he loved it.

Normally, as a graduating senior, he would hand in his thesis and be sidelined from a roiling philosophical debate about originalism and the common good. But Dellinger will be in the mix because he is in the Program for Accelerated and Advanced Degrees.

In PAAD, outstanding students take graduate-level courses as undergrads and earn both a bachelor’s and a master’s degree in five years.

“We saw that many talented students are coming here with college or advanced placement credits,” said Annette Kluck, dean of the Graduate School and professor of leadership and counselor education. “Some don’t need four years to complete their undergraduate degree, so we’re enabling them to finish out a second degree by adding one more year.

“They can save time and money, and, if they’re funded, they can make that money go further. We have a rigorous vetting process to choose the undergraduates who are ready for graduate classes.”

“The graduate classes are smaller and more in-depth,” said Steven Skultety, Dellinger’s thesis adviser, professor of philosophy and chair of the Department of Philosophy and Religion. “You can take the research from your thesis and expand it.

“This is a great opportunity for a student like Jack, who has shown energy and promise. He can make a serious scholarly contribution to the field – and having a master’s degree will distinguish him if he wants to apply to law school, which many philosophy majors do.”

John Bruce, associate professor and chair of the Department of Political Science, concurs.

“An advanced degree and empirical skills give students an extra edge no matter what they do after graduation, whether they’re entering the job market or going on with their education,” Bruce said.

Bruce noted that many political science majors, too, apply for law school, and he’s seen that PAAD students have an advantage.

Similarly, if students will be entering a doctoral program, “PAAD can set you apart and also give you a sense of what graduate school will be like before you commit to a doctoral degree,” he said. “Going straight from undergrad into a Ph.D. program can be intimidating.”

A case in point is PAAD student Madison Hamilton, of Scottsdale, Arizona. Double majoring in political science and Spanish, with a minor in psychology, she recently finished her master’s thesis, focused on comparative politics in Latin America.

“Taking 500- and 600-level classes as an undergraduate prepared me for master’s work and beyond,” she said. “After graduation, I’m going to work as a policy analyst looking at immigration issues for about three years and then I’ll apply for a Ph.D. program knowing that I’m ready for one.”