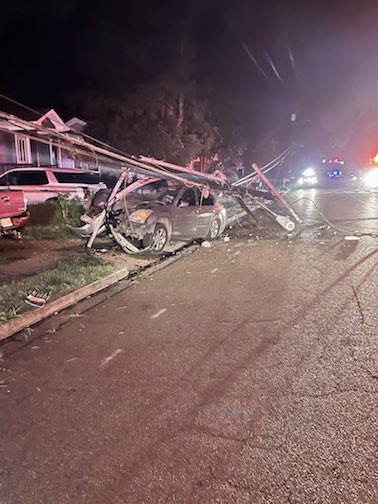 Just after Oxford Utilities restored power on Sunday after a severe storm, a vehicle hit a pole at approximately 3:45 a.m. on South 18th Street in Oxford causing damage and a power outage.

The Oxford Police Department received report of the crash at 3:24 a.m. Authorities appeared on the scene to find a grey vehicle trapped under a downed utility pole.

Officials have not released the identity of the driver or their status at this time.

Oxford Mayor Robyn Tannehill stated in a Twitter post that crews had been out all night working on repairs and asks for the public’s patience.

After getting power restored from the storm, a vehicle hit several poles on S 18th around 3:45 am knocking power out. Our crews have been out all night long. Thank you for your patience. @OxfordUtilities https://t.co/cEP0LTqjkR