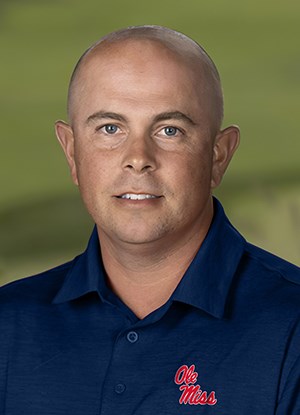 Coming off of a successful 2021-22 season serving as assistant coach for the Wisconsin men’s golf team, Siefert joins the Rebel coaching staff having 10 years of Division I and Division II coaching experience.

Additionally, Siefert served eight seasons as the head coach of the Limestone men’s and women’s golf teams (2014-21), during which his teams earned nine conference championships and qualified to the NCAA regionals 12 times with four national championship appearances. Siefert coached 11 All-Americans and five players of the year in the Carolinas Conference, while earning Coach of the Year honors in the league a notable eight times. Siefert’s teams also earned a 100 percent graduation rate.

“I am really excited about Zack joining the Ole Miss golf staff,” Henkes said. “He is a high-energy coach who is passionate about recruiting and making his players better.

“He has produced multiple team conference championships, All-Americans, Player of the Year accolades, and was also named coach of the year on numerous occasions. I have no doubt he will make an immediate impact on our program.”

“I’d like to thank Coach Henkes for this incredible opportunity and her trust in me,” Siefert said. “I love her passion, family culture and competitive drive to be the best. Ole Miss women’s golf has proven to be a national contender yearly and I’m looking forward to the challenge of adding more national championships to the program. My family and I can’t wait to get to Oxford and get going.”

Prior to his time at Limestone, Siefert served as the assistant men’s golf coach at Division I Charleston Southern during the 2013-14 season. During that time, he was also an assistant golf professional and swing instructor at Dunes West Golf Course in Charleston, South Carolina.

An accomplished golfer in his own right, Siefert began his collegiate career in 2003 at Clemson after earning the prestigious Jay Haas Award as South Carolina’s top golfer. While with the Tigers, Siefert was a three-year varsity letterman and helped lead the team to the 2004 ACC Championship and was an Academic All-American.

He earned the 2007 Ricketts Family Award for Most Improved and was voted the 2008 recipient of the Larry Wallace Dyar Captain’s Award for Outstanding Leadership and Commitment.

Siefert followed his time at Clemson with a three-year professional playing career on the NGA Hooters Tour, EGolf Tour and Carolina’s Mountain Tour. While on tour he was mentored by US PGA Tour accredited coaches Dale Lynch and Dick Harmon and claimed a Carolina Mountain Pro Tour victory.

Siefert is a 2008 graduate of Clemson with a degree in parks, recreation and tourism management, with a minor in business management.

A native of Greenville, South Carolina, Siefert and his wife, Laura, have two sons – Hayden (5) and Hampton (2).