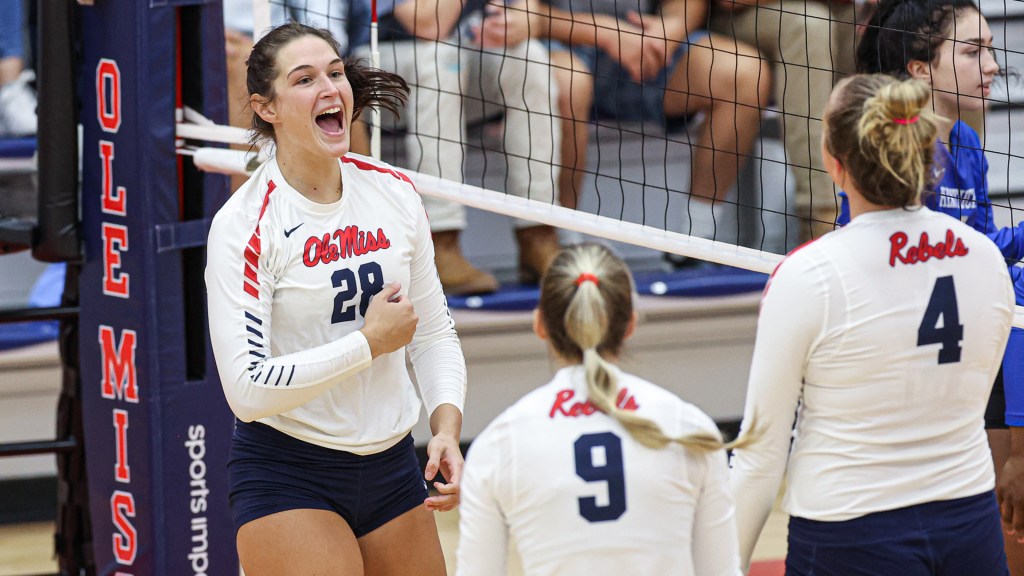 Ole Miss outside hitter Anna Bair (28) celebrates after a kill against No. 6 Kentucky on October 29th, 2021 at The Gillom Center in Oxford, MS. (Josh McCoy/Ole Miss Athletics)

After making its first NCAA Tournament appearance in 11 years last season, Ole Miss volleyball is eying a return to the Big Dance as head coach Kayla Banwarth announced the 2022 schedule.

The Rebels slate features four non-conference tournaments followed by 18 conference matches. Of their 22 opponents in 2022, 10 are coming off an NCAA Tournament appearance.

Prior to the start of the season, Ole Miss will also host its annual Red vs. Blue intrasquad and an exhibition with Lipscomb on August 20.

Non-conference action kicks off in Oxford with the Ole Miss Invitational. The Rebels are set to welcome a pair of Tournament teams from last season in Georgia Tech and Illinois to town. A tough early schedule continues in Lincoln, Nebraska, and Ole Miss squares off with the 2021 National Runner Up Nebraska and LMU Labor Day weekend.

Ole Miss remains on the road for the final two weekends of non-conference play, taking on Sam Houston, Texas State and Wake Forrest in San Marcos, Texas, September 9-10, and rounding out action in Mobile, Alabama, against Florida A&M, South Alabama and Eastern Kentucky the following weekend.

The Rebels open SEC play at home with a midweek matchup with Texas A&M on September 21, and then make the trip to Fayetteville to take on the Razorbacks on September 24. Ole Miss will then get nearly a full week’s rest to prepare for a pair of weekend matches at LSU to close out September and begin October.

Ole Miss returns home October 7-8 to host Alabama before a Wednesday night rematch with the defending SEC Champions Kentucky in Lexington. Banwarth’s squad then squares off with Missouri in Oxford on October 21-22 and closes out the month with a midweek Magnolia State matchup in Starkville.

November begins with a Wednesday contest against Tennessee at the Gillom Center and a road trip to Columbia for the weekend, featuring two matches with the Gamecocks November 5-6.

The following Friday, Ole Miss takes on Auburn at home. The Rebels will get a week to rest and prepare for the Bulldogs in Athens on November 18-19 before rounding out the regular season at home with two matches against Florida November 25-26.

Ole Miss returns 12 letterwinners from a season ago, highlighted by AVCA All-Region honorees Sasha Ratliff and Anna Bair. They also welcomed six talented freshmen and two transfers who look to factor into the mix for playing time.