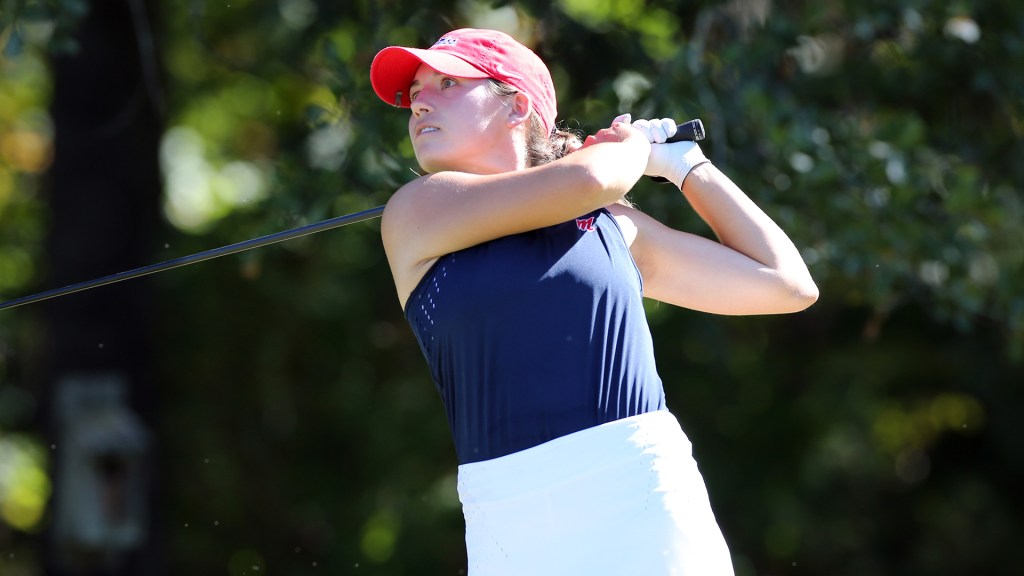 Ole Miss graduate Julia Johnson was one of five women's golfers to be recognized on the WGCA All-Scholar Team. (Petre Thomas/Ole Miss Athletics)

Ole Miss women’s golf’s recently graduated Julia Johnson saw her name amongst some of the best and brightest women in the country on Thursday, as Johnson was announced as a nominee for the 2022 NCAA Woman of the Year award.

Johnson, who completed her fifth and final year competing for the Rebels on the course this season, aims to be named the 32nd recipient of the distinguished honor which began back in 1991.

A total of 577 nominees from each of the NCAAs member schools were announced on Thursday, with the award honoring the most outstanding graduating female student-athlete that exemplifies the four pillars of the award: academics, athletics, service and leadership.

Johnson, a native to St. Gabriel, Louisiana, wrapped up her Rebel career having earned countless individual honors and awards throughout her playing career, including being a two-time All-American selection and the owner of every individual record in program history for Ole Miss women’s golf.

On a team level, Johnson played an integral role in the Rebels’ 2019 SEC Championship title, as well as helping to lead the women’s golf team to a 2021 NCAA National Championship victory. The national championship stands as Ole Miss’ first team title in a women’s sport ever, while also marking the school’s first national title win for a team since the Ole Miss football team did so in 1962.

In the classroom Johnson has also excelled, as she has now graduated from Ole Miss having earned her bachelor’s degree in political science as well as an MBA and a masters in sports analytics with a cumulative GPA of 3.50. Additionally, Johnson recently received the honor of being named a 2022 WGCA All-American Scholar, which recognizes NCAA women’s golfers for maintaining a GPA of 3.50 or above on the year.

Johnson will now wait to learn whether or not she will be selected as the SECs conference nominee, which will be decided in mid-August. Following this a shortlist of the Top 30 honorees will be selected and announced by the NCAA, with each of the NCAAs three divisions having 10 honorees. The NCAA will then announce nine finalists for the award, with each division having three finalists apiece, before the eventual Woman of the Year is announced at the 2023 NCAA Convention in January.