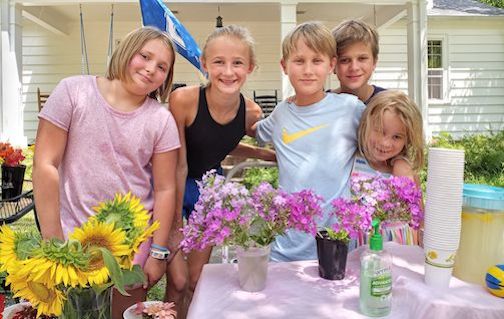 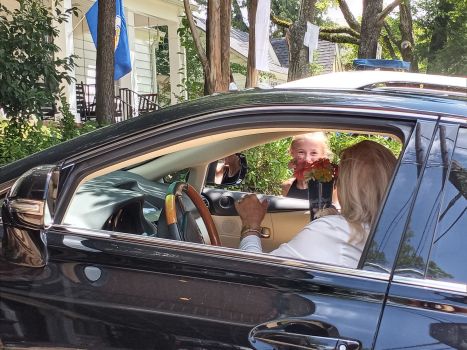 Oxford is home to many local small businesses, owned and managed by familiar faces in the community.

Over the past couple of months, even smaller businesses are cropping up on neighborhood sidewalks: the classic lemonade stand.

Once the warm, and often excruciatingly hot, weather blew in, kids and their helpful parents set up shop in their own front yards to offer a cup of lemonade to passersby.

One group of kids just a block away from the Square did something a little different on Thursday afternoon.

Clara, Ernest and Betty Lou Flaut set up a stand with their visiting cousins, Ella and Jim Brown, to sell lemonade and a variety of flowers: Sunflowers, Zinnias and Phloxes.

For $1, patrons could either get a cup of lemonade with fresh lemons, one Sunflower or three Zinnias. For $3, anyone could have all three.

“We doing it because we can,” said Jim.

“It was something fun for them to do and I had too many flowers. We’re just trying to be nostalgic, I guess,” said Emma Flaut, mother of Clara, Ernest and Betty Lou, with a laugh. The Flauts sourced the Sunflowers and Zinnias from Emma’s boyfriend in Abbeville and the Phloxes from the home of Emma’s parents.

“We don’t have full sun here, so I have to plant them out in Abbeville,” she told The Eagle.

“I saw all these kids on Instagram selling lemonade for a dollar and I was like ‘A dollar?'” Emma said. “I googled it and I said, ‘Well I guess it is.’ My grandmother would get mad at us for selling it at 25 cents. She wanted it to be at 10. She also said if you’re too old to make the lemonade, you’re too old for a lemonade stand.”

Emma’s children and her niece and nephew are all apparently at the right age to have a stand. The children set up shop on their front porch with a sign displaying their wares and a sign advertising free parking— but only if you were a paying customer.

Flowers are already a unique addition to the typical lemonade stand, but the Flauts almost included something a little for unorthodox: ducks.

The Flaut residence is home to a raft of ducks, which the kids had the idea of selling for 15 cents, however the family decided not to move forward with the fowl additions.

“We tried to put an angry duck but it was unsanitary,” said Clara.

“They’re not angry,” said Emma. “They’re just not very tame. We can’t sell them but we could let people pet them.”

Despite the lack of angry ducks, the Flauts and Browns enjoyed their time sitting out in the sun with their camping chairs and selling homemade lemonade and homegrown flowers.

“I have the shaded chair so I’m pretty happy,” said Clara.