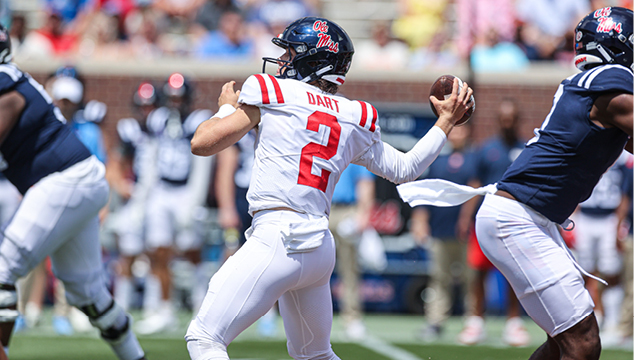 ATLANTA — Ole Miss head coach Lane Kiffin emphasized patience during his remarks at the 2022 SEC Media Days, saying the team needs time to learn the system and “build culture” with so many new faces on the roster.

Kiffin landed the No. 2 transfer class this offseason, restocking his roster with top-level talent on both sides of the ball after losing six players in the 2022 NFL Draft.

Kiffin praised the new additions, but stressed that the team will need time to adjust after an offseason full of turnover.

“Our job is—I think—really challenging this year because on paper we may look like we should be decent because we filled a lot of holes with [the] transfer portal… [but] in fall camp, it won’t just be about teaching X’s and O’s, like it always is,” Kiffin said. “We have a lot of culture work to do.”

He also weighed in on the team’s quarterback competition, saying neither Dart nor rising sophomore Luke Altmyer has established themselves as the starting signal caller.

“As far as the quarterback [position], Jackson coming in, he’s young, just like Luke,” said Kiffin. “They just finished their freshman year. It was good to have those guys for spring. It’s very competitive. We look forward to those guys battling it out and making them both the best that we can because a lot of times you need both.”

Expectations are higher than ever for the Rebels setting a program record with 10 regular-season wins last year, and Kiffin said the team is eager to get back on the field and see what their revamped roster is capable of.

“We just got to work one day at a time, integrate all these players in, play the best we can.”