Memory Makers prepares for a fiscal comeback this year 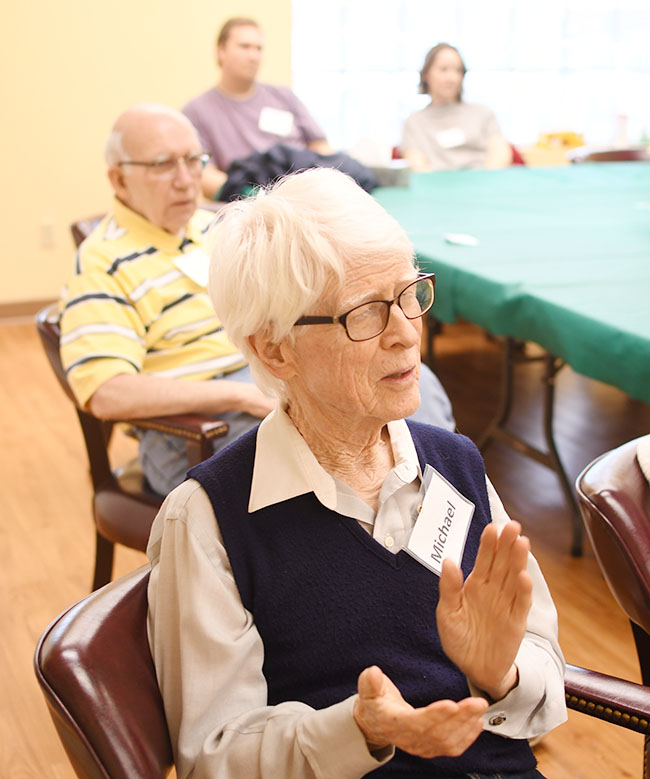 Michael Danahy sings along as Larry Tyler performs "Carolina in the Morning" for those attending Memory Makers, in Oxford, Miss. on Thursday, February 22, 2018.

Memory Makers, a respite day program for people with dementia and their caregivers, announced its plans for a substantial comeback later this year to the Oxford Board of Aldermen during a budget session.

The program shut down for almost two years due to the COVID-19 pandemic. Memory Makers board member Al Cutturini said Memory Makers tried to keep staff on during the pandemic but COVID persisted for so long that they eventually had to close their doors.

“COVID’s been hard in more ways than that we closed,” he said. “We lost four of our participants or maybe more to COVID.”

Memory Makers went from eight participants a day pre-COVID to four since it reopened its doors in January of this year with a new facility that can hold twelve participants. For $25 a day, participants can engage in creative and physical activities while caretakers have the opportunity to rest, relax or complete other day-to-day tasks.

“We have space for twelve but we only have four and that directly impacts our budget,” said Cutturini. “Expenses are still the same but we’re not bringing in that money and our fundraising is down.”

“We’re here and we’d like to get back to full strength,” Cutturini said.

Cutturini proposed a donation increase from $8,000 to $10,000 to help supplement their low revenue. Memory Makers has two fundraisers planned for later this year, but it will not cover all of Memory Maker’s costs.

“We’re trying to cover this on our own by creating scholarships,” said Cuttutrini. “We lost two years of goodwill with the community like that… We anticipate our major budgets coming at the end of the year but anticipate falling short this year just for being out for two years.”

Mayor Robyn Tannehill said the board is only listening to budget requests and taking everything into consideration.

“I wish we had a money whip. We could fix a whole lot of problems but we don’t,” said Tannehill. “COVID has hit every city department hard and we’re really focusing this year on trying to compensate our employees more. One thing that is a challenge for Memory Makers is the amount requested and the number of people affected.”

“The work you do is amazing but the difficulty comes in the number of citizens this affects based on contribution,” she said.