“I never thought I’d be in a position like this:” Cedric Johnson eager to step into leadership role for Ole Miss defense 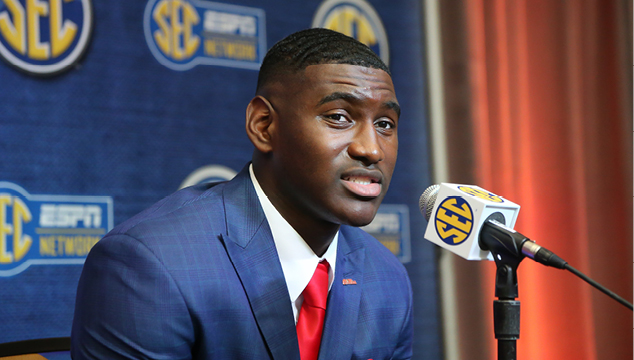 ATLANTA — Cedric Johnson never thought he would be in this position.

A three-star recruit from Mobile, Alabama, Johnson was not ranked in the top 1000 in the class of 2019, but is now being asked to step into a leadership role for an Ole Miss team that is trying to reach a New Year’s Six bowl in back-to-back seasons for the first time since 1962-1963.

The Rebels boasted one of the most improved defensive units in the country last season—giving up just 24.7 points per game compared to 38.3 per contest in 2020.

Johnson was a big part of that turnaround, providing a strong pass rushing presence on the weak side opposite Second-Team All-American Sam Williams.

He finished second on the team with 6.5 sacks, and also racked up the fourth-most tackles for loss on the team behind Williams and fellow NFL-ers Chance Campbell and Mark Robinson.

He will be asked to shoulder even more responsibility this season after Williams was drafted by the Dallas Cowboys in the second round of the NFL Draft back in April.

Johnson said he has talked to Williams a few times since the draft, and that his former teammate trusts him to continue pushing himself to be the best he can.

“I talked to him a few times… he already knows I know what to do… he knows I’ll put in the work,” Johnson said.

He added that the pressure to replace Williams’s production is a lot to handle, but said he is confident in his ability to provide the kind of edge presence the Rebels will need in their unique 3-2-6 defense.

“I put most of that pressure on myself,” he said. “I got some big shoes to fill but I feel like I can do it better—and Sam also feels that way. He told me ‘you gotta break my record’ basically.”