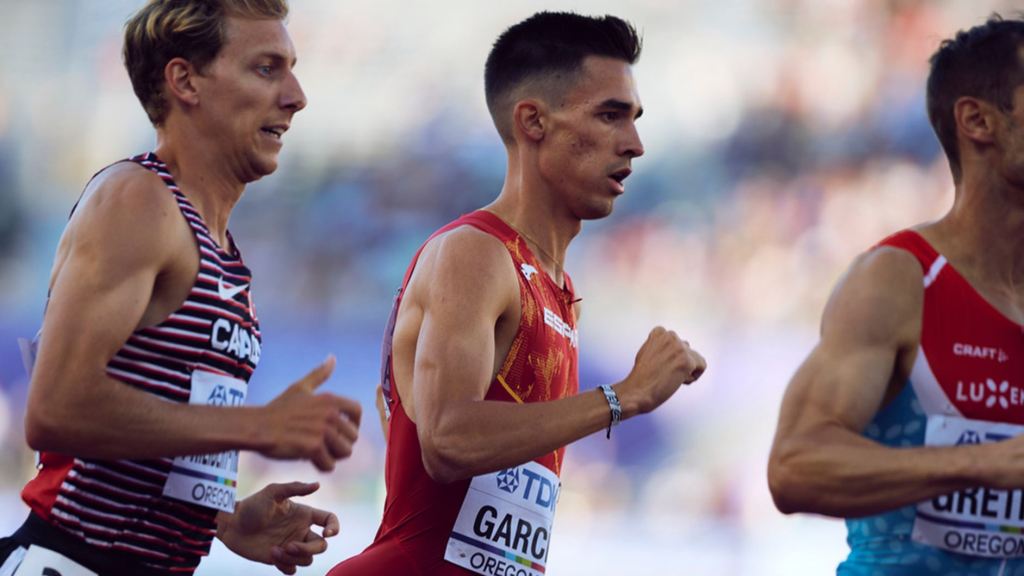 Garcia Romo, who this year was the NCAA Indoor mile champion and NCAA Outdoor 1500-meter runner-up, made the World 1500-meter final in his first career World meet as one of three 1500 runners on the Spanish national team. All three made Tuesday night’s final, which ended up as one of the fastest in meet history.

All three medalists from the 2021 Tokyo Olympic Games made the final – Norway’s Jakob Ingebrigtsen (gold), Kenya’s Timothy Cheruiyot (silver) and Great Britain’s Josh Kerr (bronze) – with Cheruiyot also holding the reigning World Championships gold from 2019. The high-powered final did not disappoint from the gun, as the field went out in 55.51 in its first 400 and 1:52.04 in its first 800.

The Olympic champ Ingebrigtsen fended off charges from Cheruiyot over the next 500 meters, expending just enough energy for a charge from the middle of the pack – led by eventual gold medal winner Jake Wightman of Great Britain – starting down the backstretch with 200 meters to go.

It was this surge train that Garcia Romo hopped onto, splitting 55.02 over his final lap, 27.29 over his last 200 and 13.70 in his last 100 to move from seventh to fourth place – missing the podium by just three hundredths of a second at a phenomenal career-best time of 3:30.20. Wightman (3:29.23) held off Ingebrigtsen (3:29.47) for the gold, while Garcia Romo’s teammate Mohamed Katir (3:29.90) nabbed Spain’s first World Championships medal in the event outdoors since 1999 (Reyes Estevez, bronze) with a bronze medal finish.

The final times clocked thanks to that ferocious last 200 were globally significant for a championship race regardless of the meet – specifically even for Garcia Romo, who just barely missed the podium. His winning time of 3:30.20 would have won gold at every iteration of the World Outdoor Championships (which dates officially to 1983) aside from two in 2019 (silver) and 1999 (bronze). It also would have won every Olympic title since the modern games began in 1896 aside from the 2021 Olympic Games in Tokyo – won by Ingebrigtsen’s Olympic record of 3:28.32 – where Garcia Romo would have finished fifth.

That time also gives Garcia Romo the all-time, all-dates collegiate record, besting Washington State’s Bernard Lagat, who ran 3:30.56 in 1999. The USTFCCCA’s all-dates list is an unofficial ranking that includes marks from outside the collegiate season by athletes who used a season of eligibility during the NCAA campaign.

Furthermore, that time makes Garcia Romo the third-fastest Spaniard ever with the fourth-best time, as well 44th in world history with the 134th-best time. Garcia Romo is also the youngest Spaniard to ever run this fast at 23 years and 21 days old. When converted to a mile time, his blistering 1500-meter finish yesterday converts to an incredible 3:46.8 mile– which stands in contrast to his mile PR of 3:53.36, the fastest time in collegiate history on an oversized track from Vanderbilt’s Music City Challenge on Feb. 11.

In his track career as a Rebel across both the indoor and outdoor seasons, Garcia Romo won one NCAA title (indoor mile, 2022), finished as an NCAA runner-up twice, earned six First-Team All-America nods, scored 30.25 total NCAA points, won five SEC titles and scored 42.5 points at the SEC Championships. Additionally, Garcia Romo was crucial in the first two SEC team titles in combined program history in cross country in 2018 and 2019, as well as becoming the third Rebel to ever win an SEC individual cross country title via a historic 1-2-3 podium sweep by the Rebels in 2020.