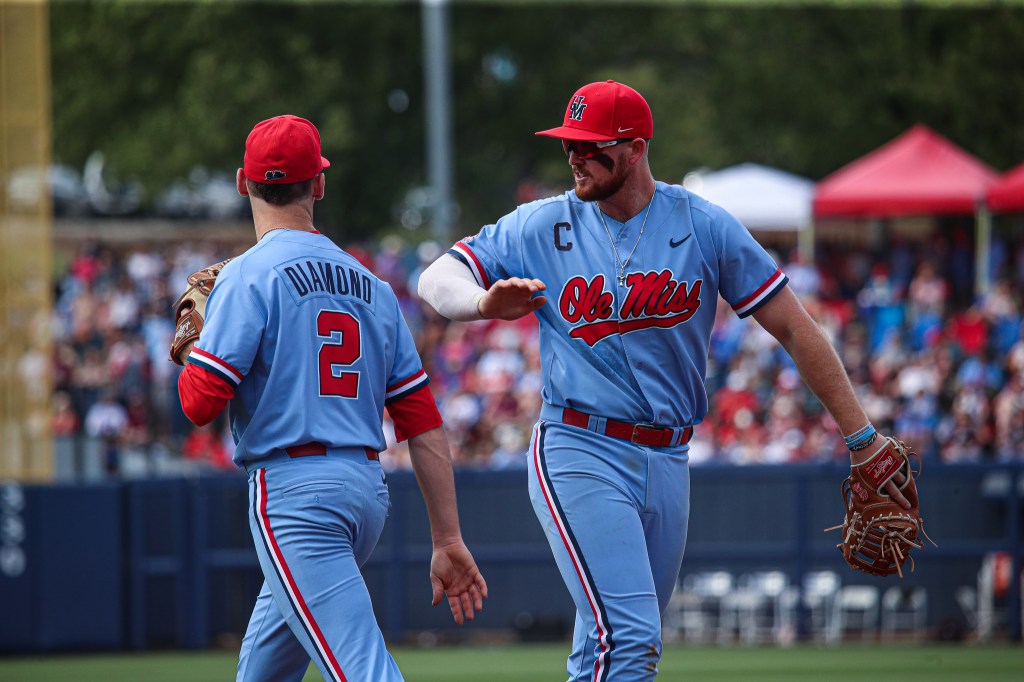 Seven players from this year’s national champion Ole Miss baseball team were drafted in the 2022 MLB draft—marking the 24th consecutive season that multiple Rebels have been selected.

The first Rebel off the board was pitcher Derek Diamond, who was selected by the Pittsburgh Pirates with the 170th overall pick. The Ramona, California native was selected 40 picks higher than anticipated after three inconsistent seasons in Oxford, and now heads to Pittsburgh with a chance to prove why he was such a highly-touted recruit coming out of high school.

Catcher Hayden Dunhurst became the second Ole Miss player to hear his name called when he was selected by the Kansas City Royals five picks later at No. 175. The slick-fielding backstop hit .260 during his collegiate career, and quickly established himself as one of the best defensive catchers in the country with his stellar glove and strong right arm.

College World Series MVP Dylan DeLucia was also selected at the end of the sixth round when he went 190th overall to the Cleveland Guardians. The Northwest Florida State transfer made the most of his only year at Ole Miss—starting the season in the bullpen before moving into the starting rotation and ultimately putting together one of the most impressive postseason runs in program history to lead the Rebels to their first-ever national championship.

First baseman Tim Elko was selected by the Chicago White Sox with the 311th overall pick in the 2022 MLB draft on Monday—bringing his collegiate career to a close after five memorable seasons in Oxford. The Lutz, Florida native had already exhausted his college eligibility, and now heads to the Windy City after an historic collegiate career that included three super regional appearances, an All-American selection and the first national championship in school history.

Elko captured the hearts of fans during his tenure in Oxford—endearing himself to the Rebel faithful by playing through a torn ACL in 2021 before re-writing the program’s record books as a fifth-year senior in 2022. He finished his career with the second-most home runs and eighth-most RBIs in program history. He also holds the school record for home runs in a single season with 24.

The Captain will have ample opportunity to prove his worth and advance through the minor league ranks as he joins a thin White Sox farm system that was ranked as the worst in baseball this season by the Athletic’s Keith Law. He will be joined on the South Side by pitcher Drew McDaniel, who signed with the White Sox as an undrafted free agent.

Left fielder Kevin Graham came off the board with the second pick in the 14th round—going 408th overall to the Arizona Diamondbacks. The slugger put together one of the most statistically impressive careers in Ole Miss history over his four years in Oxford, posting a .312 average to go along with 38 home runs and 150 RBIs in 182 games.

The final Rebel to hear their name called during the draft was utility fielder Justin Bench, who was drafted as a shortstop by the San Francisco Giants with the final pick in the 17th round. A defensive standout, Bench played all over the field for Ole Miss during his collegiate career—starting 78 games at third base, 51 in center, five at second base, four in right and three in left.

One of the most consistent players during his tenure in a Rebel uniform, Bench posted a .418 career on-base percentage and a career .308 batting average.

The Rebels’ seven selections marks the sixth-most in a single year in program history. It is the 34th consecutive season that an Ole Miss player has been selected in the draft dating back to 1989.