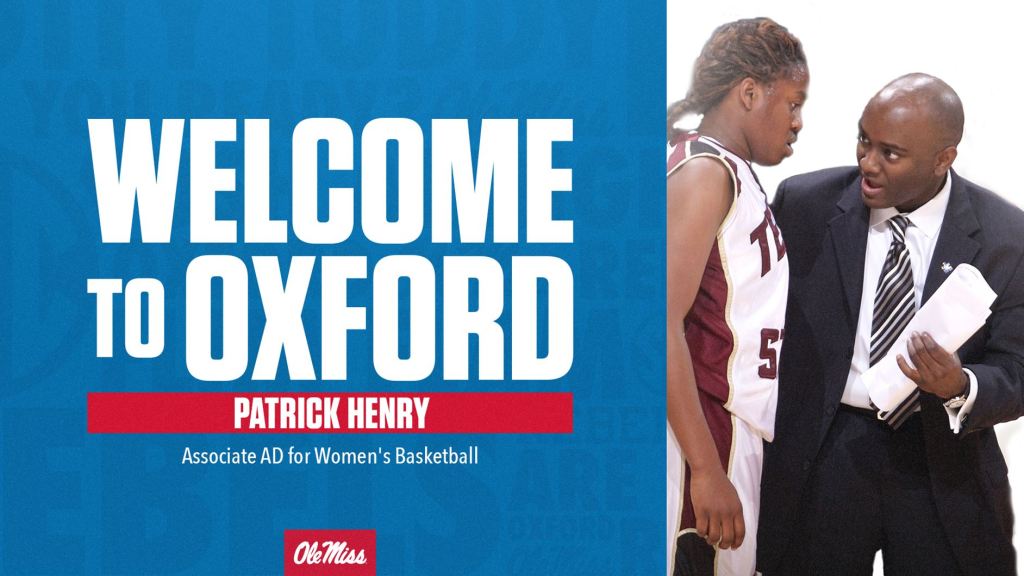 Head women’s basketball coach Yolett McPhee-McCuin continues to strengthen the support surrounding the Rebel program, with the addition of Patrick Henry as the Associate Athletic Director for Women’s Basketball.

“I am elated to have Patrick join our program,” said McPhee-McCuin. “He is a great addition for Ole Miss women’s basketball because of his roles in various capacities with several championship collegiate programs and professional organizations.”

“Along with multiple championship experiences, his relationships forged in the sports industry and corporate world as a consultant will be a positive impact on our staff as we continue to elevate our program.”

Henry will assist in the oversight of the daily organizational aspects of the program’s operations and provides assistance to the coaching staff.

“I am truly humbled to be a part of the women’s basketball program at Ole Miss and the tremendous foundation of success Coach Yo has built,” said Henry. “I look forward to the opportunity to add value and help execute the championship vision she has created as we continue to make history at one of premier programs in the country and show that there are ‘No Ceilings’ on what can be accomplished here at the University of Mississippi and the Southeastern Conference.”

With combined knowledge across business and basketball, Henry brings almost 30 years of experience to Oxford after spending time as an advanced scout for the Connecticut Sun since 2019. Along with his duties for the Sun, Henry founded Bridgeworks CS in 2015 serving as the CEO of the organization which has been recognized nationally as a subject matter expert on best practices related to X’s and O’s, organizational culture and recruiting.

Prior to 2015, Henry spent three years at Miami (Ohio) as an assistant where he specialized in the development of the Redhawk perimeter players. Known as a nationally recognized recruiter, Henry was named the Western Star Sports: Mid-American Conference Assistant Coach twice. He also led national and international recruiting for the RedHawks, including bringing in one top three MAC recruiting class.

During the 2012-13 season Henry served as the video coordinator at Indiana. While with the Hoosiers, he helped handle film exchange, filming of practice and assisted in video break down for scouting. He was also responsible for creating presentations and materials used in recruiting.

Prior to his time at Indiana, Henry was an assistant at Texas State for six seasons (2005-11). The last three seasons, he was the associate head coach. While with the Bobcats, he served as the team’s recruiting coordinator, helped develop offensive and defensive schemes and was the principle architect of an offense that finished ninth in the country in scoring in 2008.

During his career, Henry also worked on men’s staffs at Mercer (2002-05), Georgia Southern (2001-02), Frank Phillips College (2000-01) and Florida Southern (1999-00). He has also served as a member of the support staff at Ohio (1995-97). In total, he has worked for six different coaches who have been recognized as National Coach of the Year. He has worked for three different coaches who have been head coaches at the professional level, including two recognized as WNBA Coach of the Year. In addition to working at multiple levels of the coaching profession, Henry has served as a part of four separate coaching staffs that have either won or shared a conference championship (Sunshine State, Southern, Atlantic Sun and Southland).

Henry, a native of Warner Robins, Georgia, is a 1998 graduate of Ohio University, earning a bachelor’s of science in interpersonal communication with a related area of Sports Science. He earned his master of education in holistic education from Mercer University in 2005.