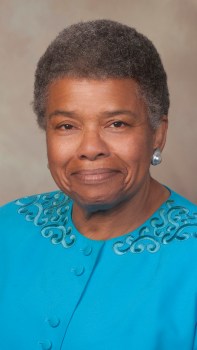 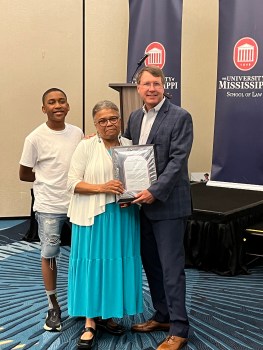 Constance Slaughter-Harvey (center) accepts the Alumna of the Year award presented by the Law Alumni Chapter of the Ole Miss Alumni Association during the recent annual meeting of the Mississippi Bar in Sandestin, Florida. She is congratulated by her grandson Tre' Burwell (left) and Jeffrey Hubbard, president of the Law Alumni Chapter. Submitted photo

University of Mississippi alumna Constance Slaughter-Harvey has been named the School of Law’s Alumna of the Year, becoming the first African American female to receive the award.

She accepted the award July 15 at the Ole Miss Alumni Association luncheon during the Mississippi Bar’s annual meeting in Sandestin, Florida. The award has been presented annually by the Alumni Association’s Law Alumni Chapter since 1974.

Bestowed upon an alumnus who has encouraged excellence in legal education and has actively participated in the betterment of the school, the award is one of the top honors given by the law school and Alumni Association.

“When I say I was honored, that’s an understatement,” Slaughter-Harvey said. “On four occasions, the law school has recognized me and each time, I feel the sacrifices made by my parents, their prayers and the support I was given.

“When I get an honor by the university, I don’t think about me – I’m just a vessel. I don’t accept it for me, but for my parents, my family, my law school roommate and those who supported me.”

Slaughter-Harvey has spent her life as a trailblazer. Originally from Forest, she completed her undergraduate degree at Tougaloo College, where she was elected the first female student body president. In 1970, she became the first African American female graduate of the UM School of Law.

In an effort to create a space and system of support for Black students in law school, she joined students from across the country as a founding member of National Black Law Students Association, or BLSA, when it formed at Rutgers University in 1968.

“I could’ve been a straight-A student, but that wasn’t my priority,” she said. “My priority was to change things so the students who come after me didn’t have to experience the way I was treated.

“I see so much change, but I know we still have a long way to go. I’m so proud of Dean (Susan) Duncan’s commitment to doing the right thing and leading the school toward more diversity and inclusion initiatives.”

Inspired to attend law school by Medgar Evers, Slaughter-Harvey began her career with the Lawyers’ Committee for Civil Rights Under Law to advocate for the rights of others. In 1976, she became the first African American female to be appointed as a judge in Mississippi.

Her career path has also included working as director of human development under Gov. William Winter, assistant secretary of state for elections and public lands, and an advocate for mail-in and motor voter registration. She is also founder and president of the Legacy Education and Community Empowerment Foundation Inc., a nonprofit organization that provides programming and mentorship to young students in Scott and Newton counties and across Mississippi.

Since its creation, the foundation – formerly the Slaughter Memorial Foundation – has assisted thousands of families and has awarded more than $100,000 in scholarships.

“Constance truly is a trailblazer for not only our school, but the legal profession,” Duncan said. “Her path to becoming the first African American woman to graduate from UM law in the 1960s was incredibly difficult due to the constant negative treatment she received, but she persevered.

“UM law is committed to creating an inclusive environment to ensure that all students feel welcome here, and this progress could not happen without her support. We are so proud of her many accomplishments throughout her career, and we are incredibly grateful for her support of our law students.”

In 1998, the Ole Miss law school’s BLSA chapter was named after Slaughter-Harvey. She continues to work closely with the chapter, offering support and mentorship to law students.

“I have watched the growth of BLSA at the university and I see that they are still mindful of their mission, both academically and socially,” she said. “I take pride in preparing those law students and helping them understand what has to be done and what is optional.”

Throughout the years, her relationship with the law school has continued to strengthen. During his time teaching at the school, professor emeritus Michael Hoffheimer invited her to speak to his classes, which she did for more than a decade before he retired in 2020.

“I frequently went to the university to mentor BLSA students but never went back to speak to all students,” she said. “Speaking to his class gave me a totally different perspective.”

But her mentorship doesn’t stop when the students complete law school. They continue to stay in touch with her after they graduate and often call her for advice.

“What we did in the past was for the past, what we do today is for today, what we do to help others survive in the future is what we at Legacy are all about,” she said. And she is thankful that her daughter, Constance; son-in-law, James; and grandson, James Burwell III, are committed to this same mission and commitment through Legacy.

“I hope I’ve contributed what was needed and more to the law school and its students,” Slaughter-Harvey said. “I’m comfortable knowing that I’m doing what God put me on Earth to do.”