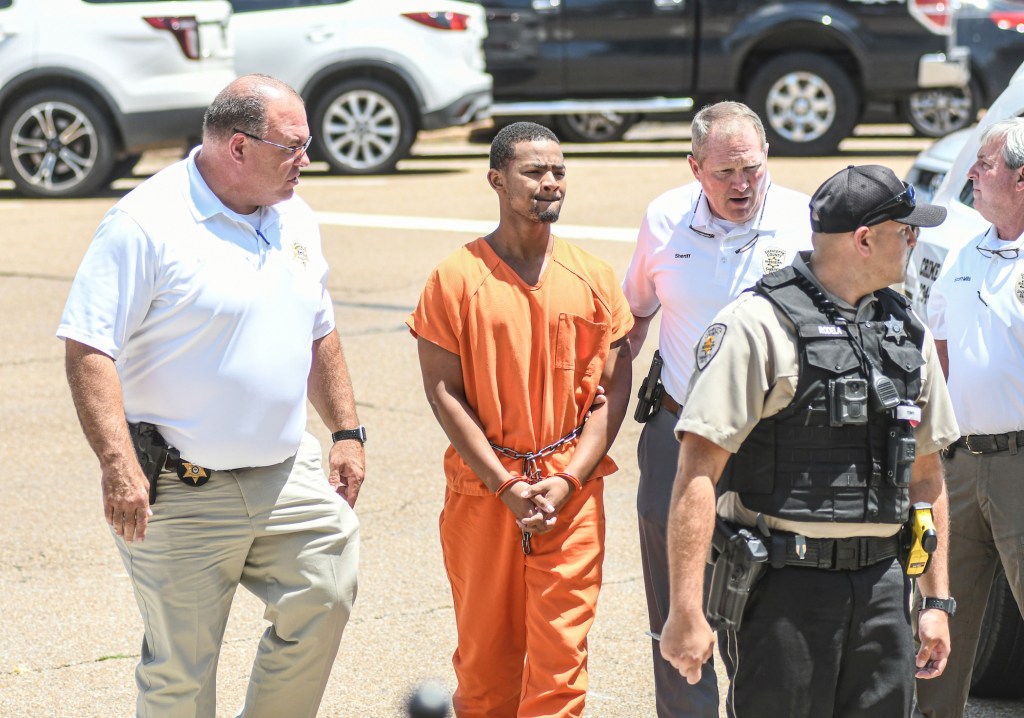 Sheldon Timothy Herrington Jr. enters the Lafayette County Courthouse for a hearing in Oxford, Miss. on Wednesday, July 27, 2022. Herrington has been charged with murder in the case of Jimmie “Jay” Lee.(©Bruce Newman)

Outside the white, two-story Lafayette County Courthouse demonstrators chanted, “No justice, no peace,” or “Justice for Jay Lee,” as a bond hearing for Sheldon Herrington, Jr., 22, of Grenada took place inside on Wednesday.

This was Herrington’s first appearance since his arrest for the first-degree murder of missing University of Mississippi student Jimmie “Jay” Lee III.

His vehicle was towed from Molly Barr Apartments later that afternoon, and police and federal investigators have been conducting an exhaustive search for Lee.

Among demonstrators outside the courtroom was a friend, Braylyn Johnson, who is demanding justice in the wake of Lee’s alleged murder.

“We’re just here today to support the victim’s family, and hopefully we can get a little bit of justice regionally today,” said Johnson.

“We don’t know what kind of monsters people are behind closed doors,” Johnson said. “You don’t know who someone is behind that suit or that position. Even if they’re so good on campus doesn’t mean that they’re not capable of hurting another member of our community. So it wasn’t that shocking at all for me.”

Amongst all the turmoil and grief the family and loved ones of Lee must be feeling, Johnson is sending them all love.

“You can tell that they’re really hurting and none of this makes it better,” Johnson said. “None of this brings it back. None of this will ever bring Jay Lee back, but they definitely deserve all the love and support to get justice for him.”

Herrington’s scheduled appearance Wednesday was to receive a bond, however the Lafayette County Circuit Court delayed setting the bond for Herrington.

Circuit Court Judge Franklin “Gray” Tollison formally stated the charge of first-degree murder against Herrington, and that Herrigonton has a right to a preliminary hearing.

During the hearing, Herrington’s defense attorney Kevin Horan requested that it be postponed to some time within the next two weeks.

A correction on past reports, Cochran firm attorney Carlos Moore, who was previously married to Herrington’s aunt for 20 years, is not representing Herrington but instead Horan of Horan & Horan Law Firm will be acting as Herrington’s lawyer.

Horan is a current member of the Mississippi House of Representatives for District 34, representing Carroll, Grenada, Holmes, Leflore and Tallahatchie counties. Assisting Horan will be Brad Daigneault also of Horan & Horan.

Tollison approved Horan’s request and adjourned the hearing. No date for the next bond hearing has been set.