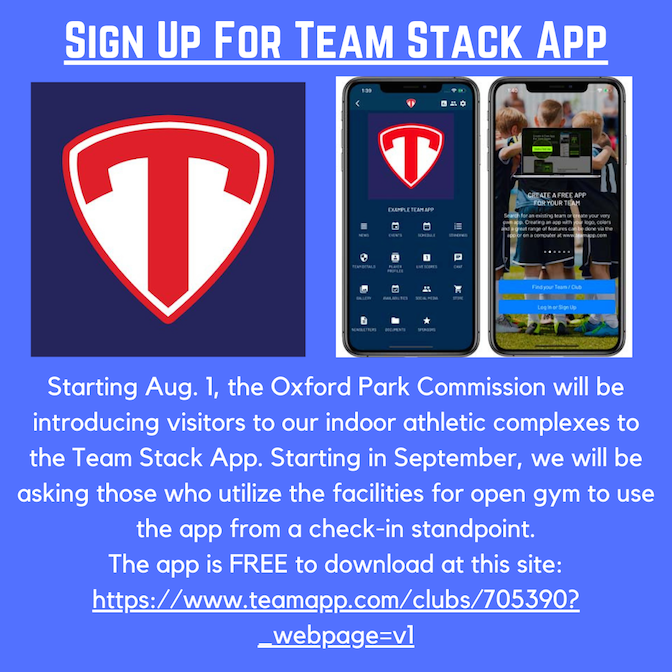 Starting Aug. 1, members of the Oxford Park Commission will be introducing everyone who enters the athletic facilities located inside the Coach Howell and the Oxford Activity Centers to the Stack Team app.

Last April, the OPC board began exploring ways that would allow employees to track who was in the facility and what was going on in their free play time. Eventually, the board landed on the Stack Team app.

“It’s kind of tracking who’s in the building, where are they and what’s going on in their free play,” Gaines said. “If there’s an emergency situation where somebody goes unconscious in our facility that nobody really knows, who do we get in touch with? This hooks on to the Blue Sombrero account that we have on our Stack Team Sports, our stack connector, or what we’ve got on our regular system and that way we can go into our membership cards and see who it is, and then access information about them.”

The app will also help employees restrict banned individuals. Gaines said if people have been banned from OPC facilities, most employees would have no way of recognizing every person that has been restricted. With the Stack Team app, it won’t be a problem.

“If we do end up having to ban someone from a facility,” he said, “We can restrict them from getting a membership card, and it just wouldn’t allow them to be scanned.”

The OPC will begin using this free app starting in September to check visitors into the facility for the use of free play and the walking track.

This means that those who play Pickleball in the centers, those that play basketball and volleyball during free play hours, and those that use the walking track on a daily basis to create a Membership Card on the app.

Participants of instructional classes such as youth gymnastics, karate, fencing or wrestling or those that have signed up to play a team sport like volleyball or basketball in the fall and winter will not have to scan in each time they enter the Coach Howell Center. This system will only be for those who are not enrolled in a class or activity.

OPC staff will be able to help those that don’t have direct access to an iPhone or an Android device by creating an account for them on the app inside the Coach Howell Center. An OPC staff administrator can scan visitors into the center. Each account holder will need to upload their photo to create a Membership Card.

Activity center visitors may worry about the cost of membership. However, Gaines told The Eagle that membership cards will be free through the app.

“It’s going to say to buy or purchase a membership card,” he said. “But it is free.”

When the app is first opened, users can search “Oxford Park Commission” to gain access to your team. Once that has been accomplished,  an icon at the bottom of the screen that says Membership Card should be visible. By tapping on that icon, the card will be created and the photo uploaded.

Once all of that is done, individuals will need to close the app, open it back up, and go to the top right corner to the settings icon that looks like a wheel.

If parents or guardians would like to add their children to their account, under My Account users can add their child’s name, information, and photo. This will create another membership card that can be sent to the child’s phone.

If an adult or child does not have a smartphone to use the Stack Team app, membership cards can be printed off at the Oxford Park Commission’s Teamapp website.

To sign up for membership, visit the site at www.oxfordparkcommission.teamapp.com.