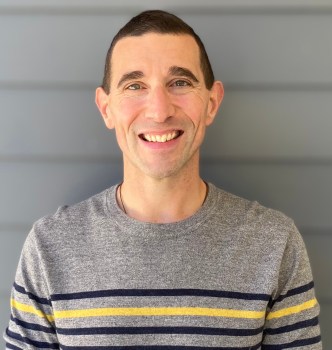 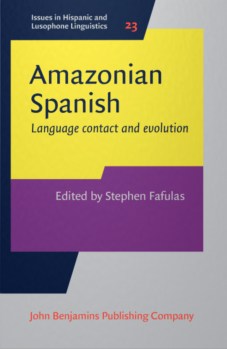 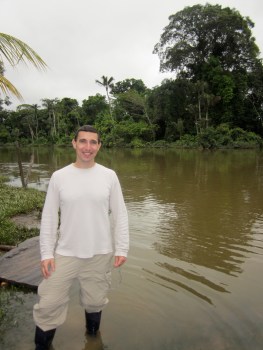 University of Mississippi professor Stephen Fafulas visited villages in the Loreto area of the Peruvian Amazon in 2011 to interview people and conduct fieldwork for his project. Submitted photo 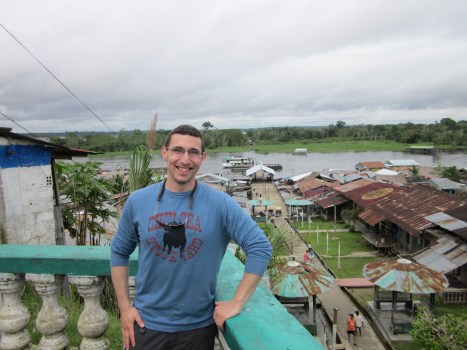 University of Mississippi professor Stephen Fafulas is continuing his study of Spanish dialects in the Loreto area of the Peruvian Amazon this summer, thanks to a National Endowment for the Humanities stipend. He is using data he collected during a 2011 visit to the region. Submitted photo

A University of Mississippi professor is spending his summer translating Spanish transcriptions of his interviews with members of indigenous communities in the Peruvian Amazon into English, thanks to a summer stipend from the National Endowment for the Humanities.

Stephen Fafulas, associate professor of Spanish and linguistics, is using data he collected during fieldwork in 2011 to complete “Documenting Language Practices, Cultures and Ideologies among Indigenous Communities in the Peruvian Amazon.” The data comes from interviews within communities of three distinct indigenous languages in the Peruvian Amazon.

Numerous indigenous languages coexist with Spanish, the national language of Peru. Fafulas hopes to use what he learns to publish his research and then identify funding to keep going back to continue his investigation.

“Peru’s indigenous languages are steadily losing status and power to Spanish as speakers look to increase their upward social mobility and gain access to the greater health care, educational and economic sectors of the country,” he said. “My project documents the linguistic, cultural and social aspects of indigenous communities undergoing language shift in the Peruvian Amazon.

“The linguistic structures of indigenous languages are of great scientific interest for a host of theoretical and typological reasons.”

Additionally, so are the cultural practices of the local communities, given their place within the rich biodiversity of the Amazonian region, he said.

“It is timely to document the linguistic and cultural practices of the Amazonian communities, including language samples of the indigenous languages and their emerging Spanish dialects before they are gone,” Fafulas said. “By valorizing the indigenous languages and having the community’s needs acknowledged, these communities may be able to reverse the tide of losing their cultural legacy.”

His project empirically documents the linguistic, ideological and cultural legacies of indigenous populations in the Peruvian Amazon to show:

Fafulas was one of only two UM faculty nominations allowed for this highly competitive annual competition. Following a four-level review process, only about 11% of applications nationwide are selected by NEH for an award each year.

His success reflects the quality of Fafulas’ research and of the overall level of excellence in the department, said Donald Dyer, associate dean for faculty and academic affairs in the College of Liberal Arts and distinguished professor of modern languages.

“Dr. Fafulas was chosen from among a large number of applicants nationwide for this award after being selected as one of only two University of Mississippi participants in the competition,” Dyer said.

“Dr. Fafulas’s work in the indigenous languages of the Peruvian Amazon has extremely important implications for the field and brings important recognition to the Department of Modern Languages in particular and the College of Liberal Arts and the University of Mississippi in a broader sense.”

To complement the NEH stipend, all UM nominees and awardees also receive a supplemental humanities stipend from the university’s Office of Research and Sponsored Programs and the College of Liberal Arts.

“Generous funding through the NEH summer stipend and the supplemental award are allowing me to dedicate the summer months to completing a peer-reviewed journal article to publish the findings from an ongoing analysis of how Spanish is emerging in these indigenous communities in the northern Peruvian Amazon region where Bora, Ocaina and Yagua, three endangered indigenous languages, are spoken,” Fafulas said.

“Importantly, this study offers an assessment of the language vitality of Bora, Ocaina and Yagua, based on self-reported proficiency and intergenerational transmission data, as well as a comparative view of community ideologies and cultural practices across generations from participant interviews.”

Fafulas first traveled to the region in 2003 with Project Amazonas, a nonprofit humanitarian, conservation and educational organization. He has remained in contact with the organization, local community members and researchers working to document indigenous languages in the region.

In 2011, he returned with funding from an Indiana University Pre-Dissertation Research Travel Grant and joined Project Amazonas to conduct sociolinguistic fieldwork.

In 2020, Fafulas published “Amazonian Spanish: Language Contact and Evolution” (John Benjamins Publishing). This is the first full-length volume – written in English – to document the spread of Spanish and the linguistic, social and historical characteristics of indigenous language communities undergoing language shift and acculturation in the Amazon region.

Daniel O’Sullivan, chair of the modern languages department and a professor of French, said Fafulas is highly deserving of the award.

“Dr. Fafulas is one of the strongest researchers we have in modern languages and, I would argue, the College of Liberal Arts,” he said. “He has established himself as one of the foremost authorities on Spanish varieties all over the world and especially languages in the Peruvian Amazon.

“It’s an honor to chair a department with such strong researchers among its faculty. It makes recruitment and retention of both faculty and graduate students that much easier.”