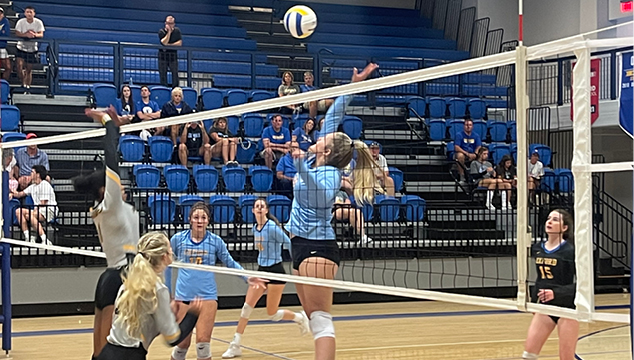 Oxford volleyball looks ready to defend their North Half title.

The Lady Chargers returned to the court for the first time in nearly 10 months on Saturday as they took down Pontotoc in straight sets in a preseason scrimmage.

Head coach Ashley Martin’s team dominated from the outset—winning the first set 25-6 as they prevented the Warriors from recording a single kill.

They stumbled a bit to start the second set, but scored nine straight points after falling behind 5-2 to open up a sizable lead.

After Oxford cruised the rest of the way to secure a 25-14 victory in the second set, the two sides agreed to play one more set to 15 in order to maximize playing time and continue to work out the preseason kinks.

The final set turned out to be the most competitive one of the night as the Lady Chargers fell behind 11-12 before claiming four of the next five points to close out the match.

“I was happy to see our team come together and be able to run plays and execute the offense,” Martin said. “I thought our defense was really good…we still have to work on a few things… we’ll watch this film and talk about it on Monday at practice.”

Senior Torrey Tkatch and junior Ava East led the match with nine kills a piece, while senior Bree Lyons and junior Madi Jones each registered a team-high six digs on the night.

Sophomore Claire Wicker excelled in her first game as the primary setter for Oxford—settling in after an uneven start to the first set and running the offense smoothly.

She was precise with her passes and effectively put teammates in position to score close to the net, while also showing off her ability to catch opposing teams off guard with a quick-twitch fake set that left Pontotoc’s defense scrambling.

“I think Claire did a great job tonight. I think as she continues to grow that she’s going to be a phenomenal setter and a huge part of our team. We’re gonna be looking for big things from her,” Martin said.

The Lady Chargers kick off their North Half title defense in earnest on Friday when they take on Lafayette in their first match of the regular season.

Martin made a plea to fans to show up in force to Friday’s match, asking for fans of both teams to come pack the house with no football games on the schedule.

“There’s no football game so I’m hoping there’s going to be a really big crowd for Lafayette and for us,” Martin said. “It would be awesome to have a packed house at Lafayette.

Oxford will take on the Commodores at 6 p.m. on Friday at Lafayette High School.