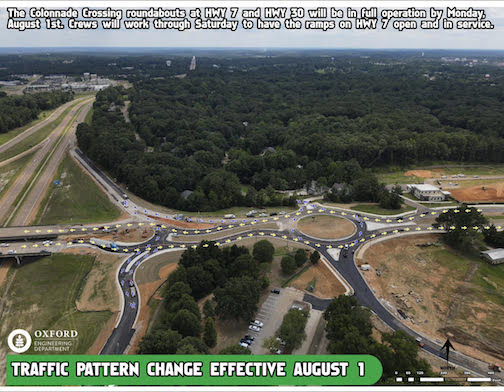 Photo: The City of Oxford

Editor’s note: This article was edited to correct the information regarding Highway 7’s ramp.

The Colonnade Crossing roundabouts at Highway 7 and Highway 30 are in full operation today.

On Saturday, the City of Oxford announced that the crews worked through the day to have the ramps on HWY 7 open and in service for the public. The ramp was closed recently to complete the construction.

Due to heavy storms on Saturday, the construction crew were prevented from completing the work to reopen HWY 7’s southbound ramps at HWY 30. However, crews are working to open the ramps as soon as possible, said an official.

The heavy storms on Saturday prevented the completion of work necessary to reopen the highway 7 southbound ramps at highway 30. The new roundabouts are open. Crews are working to open the ramps as soon as possible.

The new roundabouts will be single lane similar to South Lamar Boulevard until final striping is completed in the coming weeks.

City officials stated as a reminder, that traffic will be particularly heavy and delays are anticipated each day from 7 to 8 a.m. as parents become accustomed to drop-off at the new Oxford Early Childhood Center, formerly the site of Oxford Elementary School.

Drivers are advised to use caution as travelers get used to new traffic patterns.