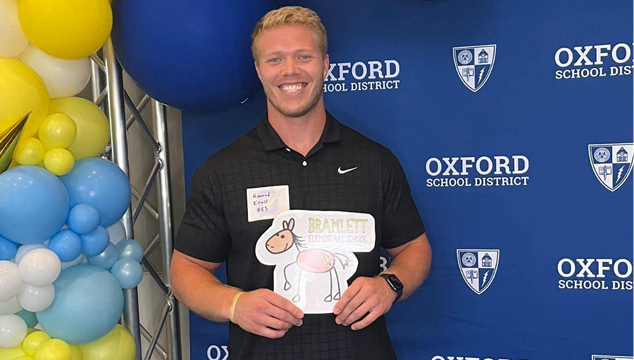 Oxford High School introduced Konrad Ernst as the school’s first-ever wrestling coach on Saturday as the team prepares to kick off its first season of competition.

Ernst, who served as a substitute teacher at Bramlett Elementary and Oxford Middle School last year, brings years of experience as a former two-time All-American at Wisconsin-La Crosse. He is the first former All-American to serve as a head coach for a Mississippi high school wrestling team.

“We got extremely lucky to be able to find somebody that had a background in wrestling,” said Oxford co-activities director Chris Baughman. “With his expertise and his background in it, we’re excited about the possibilities of where he could take this program.”

For years Mississippi was the only state in the country without a sanctioned statewide high school wrestling competition. The MHSAA has sanctioned wrestling since 1972, but the state has never sponsored a championship and participation began to dwindle in the 1980s.

Ocean Springs High School became the first school in the state to revive their wrestling program back in 2008, and now more than 20 schools are set to compete in the sports inaugural season after years of lobbying from the Mississippi Wrestling Foundation.

“I think it’s a huge step for wrestling across the nation—seeing that it’s now in every state,” Ernst said. “We’re so happy that Mississippi is finally on board… it just goes to show that wrestling is a successful sport that people all around the nation, all around the world want to be a part of. It’s one of the oldest sports known to man so having it here is really good.”

Oxford will host tryouts for both boys and girls starting the first week of September.