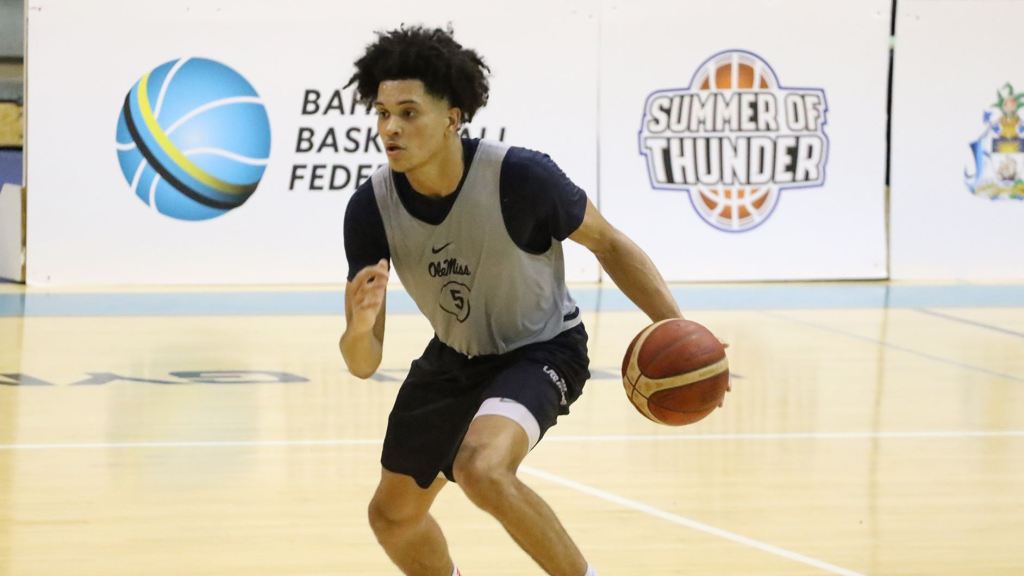 NASSAU, The Bahamas – Ole Miss men’s basketball was in a dogfight with most of the Bahamian national team throughout the first half, but a mixture of young talent and returning veterans helped spur the Rebels to a big second-half surge to run away from the Bahamas Select Team, 89-71, to open Ole Miss’ foreign tour on Monday night.

The Rebels trailed after the first quarter, and only led by three at the break (39-36), but Ole Miss came out swinging in the second half, shooting 47.7 percent in the back half and ripping off a late 11-0 run to seal the game for good. The Rebels shot 43.8 percent overall while holding the Bahamas to 38.8 and a 25 percent clip from beyond the arc. Ole Miss was also dominant on the boards (54-37), it forced 23 turnovers it turned into 24 points, and it also surged defensively in the second half with eight of its total 10 blocks on the night. In total, seven Rebels had at least one rejection.

“We played a good team,” said Ole Miss head coach Kermit Davis. “A lot of those guys are pro players who play on their national team. I thought when we came out, we didn’t compete really hard, we were a little nervous. We played three freshmen quite a bit, but I’m just really proud of how those guys played in the second half. I thought that our defense picked up and we got out in transition. We left a lot of points on the board early in the first half, but then we got into transition and just had a better presence around the goal.”

Sophomore James White had a breakout performance for the Rebels, leading the way with 23 points that were balanced fairly evenly with an 11-point first half and a 12-point back half. As a freshman last season he averaged 2.2 points in limited playing time, but he looked like a seasoned vet on Monday night in a game that featured a lot of young, new faces.

“I’m proud of James White, that’s how he’s been practicing,” Davis said. “He had 23, but I thought it really was the little things that helped him get 23. He defended, played within a system, could go get shots on his own.”

“(White) is just so much more confident and he’s playing within the system,” Davis continued. “He went out there and got some buckets on his own. I just really think that he’s getting better, he understands what we’re doing so much better, he works on team defense so much better, he’s talking, he’s handling coaching great and he doesn’t flinch at that.”

True freshman Amaree Abram impressed in his unofficial Rebel debut as well, dropping 11 second-half points to end up with 14 on the night – thanks in large part to a fearless attitude from the three-point line, where he went 4-of-7.

Junior stalwart Matthew Murrell was consistent as always, helping pace the Rebels with nine points in the first half before ending up with 16 total.

“We’re going to start some different guys every half and every game,” Davis said. “I thought Jaemyn (Brakefield) wasn’t being really physical around the goal, but then we put him back in at the end and that was the best five minutes he played. It’s unfortunate with Josh (Mballa) and Robert (Cowherd) going down, two guys who were playing really well. We’re hoping to get both of them back in mid-September. For these guys to get some experience in playing together here in Atlantis is just an unbelievable experience, we love it.”

Up next, Ole Miss will take on the Discount Distributors Rockets on Tuesday night (Aug. 2) at 5 p.m. CT. For more info, visit our Bahama Rebs hub page.