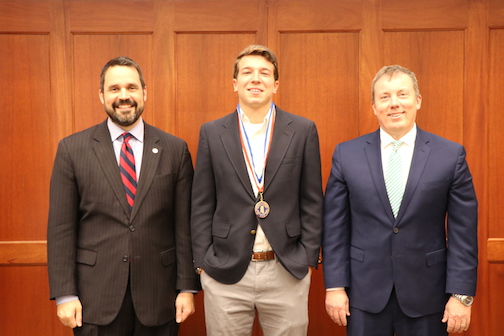 Northwest Mississippi Community College is proud to announce that recent graduate Matthew Locke of Oxford has been awarded the prestigious Lyceum Scholarship at the University of Mississippi.

“I was told that over 350 students applied, and only 15 scholarships are awarded,” Locke said. “Obviously, I may have been number 15 on the list, but I’m on it. It means all of the hard work is starting to pay off, in and out of the classroom. It means I have more academic, social and leadership ability than I once gave myself credit for. It also means people believe in that ability enough to help make my academic dreams a reality.”

Locke, a home-schooled student from Oxford, graduated from Northwest in the spring of 2022 with an associates degree in business administration. He attended the Oxford campus, and was a recipient of the Students Honoring Bobby King Endowed Scholarship. A member of Gamma Beta Phi and president of Phi Theta Kappa Beta Eta Theta chapter during his time as a student, he was also named to the PTK All-Mississippi Academic Team. He graduated from the college with a 3.949 GPA.

“Usually when people are met with accolades, they will say something along the lines of, ‘This honor humbled me,’ but I’m proud of my achievements at Northwest,” Locke said. “They gave me the confidence to try anything that piques my interest.”

He intends to continue pursuing leadership roles at Ole Miss, expressing interest in the university’s Student Real Estate Society, as well as potentially serving as an orientation leader and a Student Leadership and Engagement Ambassador to help other students find clubs and organizations that interest them.

Locke plans to double major in finance and real estate at Ole Miss, and said his goal is to gain a deeper understanding of how money works in relation to loans, stocks and the way in which money is distributed through companies.

“Complex economics and financial strategies fascinate me,” he said. “I will also have enough real estate course hours to take the Mississippi Real Estate license exam upon my graduation in May 2024.”

Laser-focused on his future, Locke said his 15-year goal is to become a residential real estate developer, though he would like to work as a financial advisor and real estate broker while he continues to further his education on the real estate market, build capital and meet contacts.

“I want to develop residential homes because I have always been enamored with humanity and how we build houses and turn them into homes,” he said. “Growing up working in my family’s lawn service taught me a lot about landscaping and curb appeal as well.”

Locke confessed that he has been disappointed in certain forms of modern architecture, and would find it tremendously fulfilling to be part of shaping the next generation of development.

As for his interest in serving as a financial advisor, Locke’s reasons are several.

“Primarily, I know it’s a good way to figure out how people spend their money,” he said. “Furthermore, I find the process of financial planning riveting. Becoming a real estate broker will help me learn about the ever-shifting real estate market and assist me in my search for contacts when I start developing homes.”

As a high school student who was home-schooled, Locke said his experience at Northwest played an important part in readying him for his academic journey at a university by helping him adjust to a stricter schedule.

“Growing up home-schooled was different because my schedule was incredibly flexible,” he said. “Due dates were suggestions that could be extended if something out of my control came up. However, Northwest is college, and all assignments are due at the end of the week. When I get to Ole Miss, that will be a much easier transition than if I went straight to a four-year university.”

When asked what he would share with potential Northwest students, he said he would encourage them to enroll at the college to build confidence.

“For anyone who isn’t sure if they would like college, Northwest is a less risky way of testing the waters,” said Locke. “I made a 21 on my ACT; four-year colleges would most likely expect me to be an average, even below average, student. However, I was able to excel at Northwest because I gained the confidence needed to overcome my test anxiety. Something about the smaller class sizes kept me calm during test time, which really helped me stay focused.”

Locke specifically credits his American history instructor and advisor Matt Johnson for making sure he stayed on the right academic path to Ole Miss.

“He would spend an hour with me before I signed up for classes each semester, and we would make sure I was taking courses that would transfer to Ole Miss and electives that would prepare me for my career and shape me into a well-rounded human being,” he stated.

“He kept my attention enough to make a subject I’ve now taken three times, at different grade levels, the most interesting course during my time at Northwest,” he said. “I cursed the essays he made us write every time, but I know they prepared me for other college-level work. They made me realize I could write well if I put in the effort.”

Johnson said he was excited to see Locke’s well-deserved success.

“We could not be more pleased by and thrilled for Matthew,” Johnson said. “He excelled both in and outside the classroom with Phi Theta Kappa and various community endeavors. Ole Miss clearly sees the potential in him, as his scholarship awards speak to his remarkable grades, passionate leadership and unimpeachable moral character. We always appreciate those who shine in the classroom, but those who also serve the community exemplify the mission of Northwest. He has been a true asset to the college.”

Locke will start at Ole Miss in the fall 2022 semester. For more information about Northwest, visit northwestms.edu.