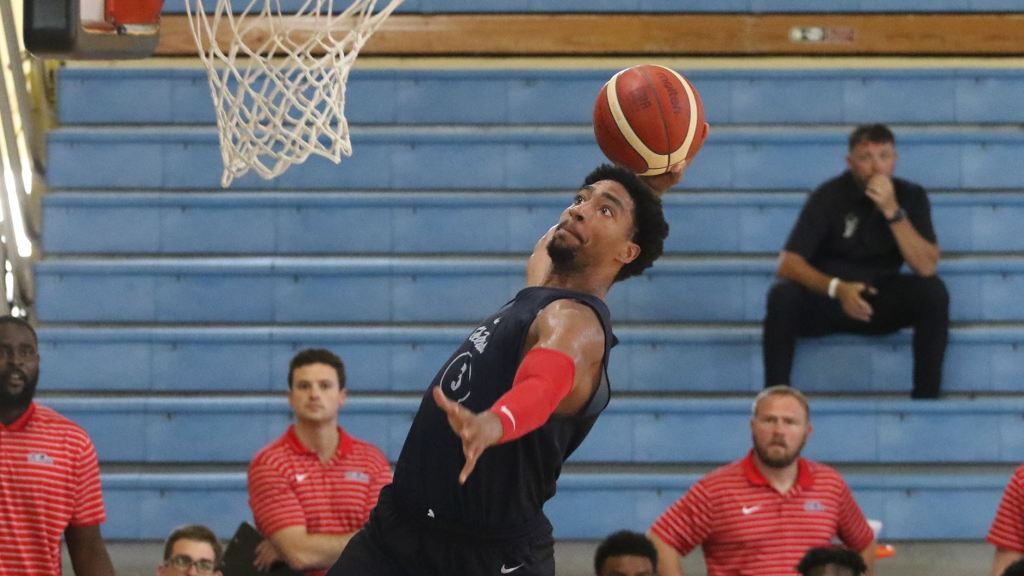 Ole Miss forward Myles Burns rises for a dunk against Raw Elite Talent in the final game of their foreign tour in the Bahamas on Thursday. (Ole Miss Athletics)

NASSAU, The Bahamas – Ole Miss men’s basketball dominated from wire-to-wire, breezing past Raw Talent Elite on Thursday afternoon, 121-75, to close out a successful 3-0 week of exhibition games as part of its foreign tour to The Bahamas.

The Rebels commanded every facet of the game, shooting 58 percent overall thanks in large part to a furious fastbreak offensive assault that dazzled with 19 fastbreak points and 23 points off 18 forced turnovers. Five Rebels were in double-digit scoring – James White (23), Jayveous McKinnis (17), TJ Caldwell (17), Malique Ewin (16) and Amaree Abram (10) – and all but one Rebel had at least five rebounds, helping lead Ole Miss to another monster rebounding margin of 63-33. The icing on the cake was an efficient and careful offense that tallied an assist/turnover spread of 25/10.

“That was the best that we played, and I thought that the day off where we watched about 45 minutes of tape and met as individual groups really helped us be more determined on the ball defensively,” said Ole Miss head coach Kermit Davis. “I thought that Amaree (Abram), TJ (Caldwell), Matt (Murrell), James (White) and Myles (Burns) all really were guarding the perimeter. I thought we had some good shot blocking, five guys in double figures, and I was just really proud of our freshmen. Malique Ewin having 16 and seven, Amaree and TJ both played good. James White just continues to fill up the stats. I think he’s scoring just because his assist-turnover rate is really great, rebounding is terrific. Theo (Akwuba) with 12 rebounds and five blocks, he and Jay (Jayveous McKinnis) both were really good around the rim. It was just a good trip. Now we take off two weeks, make sure everybody gets home safely and enjoy time with their families, then we gotta get back and go to work.”

For the third straight game, sophomore James White took command of the Rebel offense with another 20-point outing, dropping 23 points on 11-of-17 shooting with seven rebounds, five assists and one steal. Most impressively, he did so in the fewest minutes he’s played in Nassau so far at just 23 on Thursday. Overall in the tour, White averaged 23.7 points, 6.7 rebounds and 4.7 assists while shooting 32-of-50 overall (.640) – all from within the three-point arc.

“I’m trying to get Jayveous to play like a small forward and a power forward. He’s gotta go out and try to guard 6-7 and 6-8 elite guys in the SEC,” Davis said. “With TJ, he can be an elite on-ball defender. I thought he playmaked better, we took him off the ball a little bit where he didn’t play as much point, and I thought he just played good and his assist-turnover was better. Malique’s whole thing is trying to get himself through fatigue and trying to get himself in good shape. Once he does that and can get over that hump, he’s got a chance to be a really good player. I thought he had good positioning, he was strong around the goal, 16 and seven is the best he’s played. I was also pleased with Myles Burns and the energy he brought every day.”

The successful week is even more impressive when considering Ole Miss was down four to injury – Robert Allen, Robert Cowherd, Josh Mballa and Daeshun Ruffin – with senior Tye Fagan also playing limited minutes due to a nagging knee injury.

“Tye Fagan, we kind of held him out. He’s going to have a little injection when he gets back,” Davis said. “It’s the same knee that’s been hampering him a little bit. We kind of went with about nine guys, but when Tye played he was good. We just gotta get back and go to work and keep these guys healthy. Hopefully by mid-September we can get a full roster, then by the first of October we can really get some guys rolling in there. I think we really have a good chance to have a really good team.”

In total as a team, Ole Miss outscored its opponents by a margin of 27.3 points per game, shot .517 overall while holding opposing offenses to just .338, and held a massive +24.6 edge on the boards across three games. The Rebels now return home for some time off before the start of the semester and then the official start of practice in late September.

“I tell you what, Atlantis is a must-see for everybody,” Davis said. “It’s my first time and it really is (a trip of a lifetime). For young people, it’s unbelievable with the things they got to do, the food, the hospitality, it was all remarkable. Our guys had a ball, conducted themselves great and represented Ole Miss well. They’re a good group, this was a heck of a trip. Thanks to Maury Hanks and Global Sports who did an unbelievable job. It’s something that we’ll remember for a lifetime.”

Season tickets for the 2022-23 season are on sale now. Dates, times and TV assignments for both the non-conference and SEC seasons will be announced at a later date.