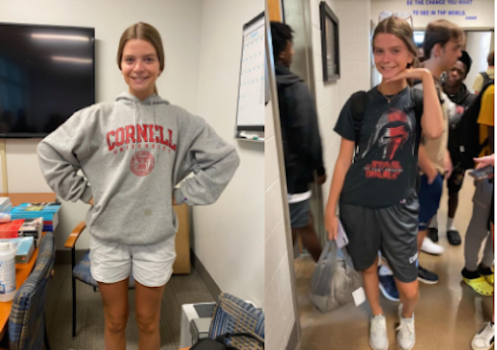 As uproar continues from parents and students, the Oxford School District says less than 2 percent of students have been cited for dress code violations during the first three days of school.

The Oxford School District responded to Oxford High School students and parents with a statement on Friday amid controversy over OHS’ handling and enforcement of the district dress code.

This past week, students and their parents have expressed concern over OSD and Oxford High School’s handling and enforcement of the district’s dress code, calling it unfair, irregularly enforced and biased towards female students.

In an official message, OSD Superintendent Bradley Roberson aimed to provide families with a better understanding of the situation.

“First and foremost, our administrators and teachers love and support our students,” said Roberson. “While there has been a lot of focus and attention on dress code enforcement, it has actually involved a small number of students.”

OSD data report was issued reflecting the approximate number of occurrences from Tuesday-Thursday in which students were asked to change their attire due to the dress code violations:

Secondary students have been in compliance with the dress code 98.3% of the time, the statement said.

Any occurrences or dress code violations in the past week were not documented in the student information system, PowerSchool, giving students and teachers a grace period to understand the norms and expectations, said Roberson.

“As of 9:00 am [Friday], principals continue to report fewer violations than the day before,” Roberson stated. “The administrative team is in daily communication across campuses regarding dress code enforcement. Our goal is to continue to refine our process and establish consistency while addressing students as discreetly as possible.”

Though the violations are not recorded, students were reportedly removed from class and sent to the principal’s office, where they were made to wait for their parents to bring a change of clothes. If students were unable to change, they were sent home or given detention.

Jake Ott is one of those parents speaking out against the implementation of the dress code changes.

His daughter and several other female students were detained as soon as they entered the school campus and made to change clothes.

Ott said the timing of changes is a critical part of the issue. “Unfortunately, school has started, and the district sent a ‘fact check’ notice to families six weeks ago stating that there would be no change to the code, no change in its enforcement and not even a discussion of either. Families, friends, extended families and charities in our area have already spent their respective budgets on back to school clothes based off previous years and the June letter,” he said.

“For the district to state that there would be no change to the subjective, vague, ambiguous and arbitrary code; no change in its enforcement; and to not even have a discussion about changing either six weeks ago, the timing of their (seemingly) unilateral about-face to uncompromising enforcement of the most restrictive interpretation of this poorly written code feels like an bait and switch under the guise of not distracting teenage boys,” he said. “It doesn’t really ring of transparency or honesty to these ears.”

Like others, Ott would like to see the district pause implementation of changes. “This is a great opportunity for the district to walk this back and engage with the community, teachers, parents and students to arrive at an acceptable solution for everyone,” he said. “We can take a couple months and get something together so that people know what to purchase when it is time to Christmas shop for the 2023-24 school year. Certainly, we need to know before school is out for summer break.”

According to OHS senior Kanalu Avery, the administration has a history of sexist code enforcement that has only become more blatant with the new administration.

“OHS defends their rules and intense punishments — immediate detention if you are unable to change clothes — by claiming it is to protect girls from being sexualized and avoid classroom disruption,” Avery said. “It is completely wrong to assume that male students even care. There will always be bad apples in a high school, no need to punish the bunch for their transgressions.”

“We came here to learn, not to be objectified by the same people we are expected to respect,” he concluded.

Winnie Wilson, student body president and The Charger Editor-in-Chief, published an opinion editorial on The Charger website discussing the subjective nature of the dress code and lack of consistency.

Wilson said the op-ed has received a lot of good feedback.

“A lot of not only Oxford High School students but also the Oxford community, especially parents, have applauded my op-Ed and have said it sums up the majority of the issues,” she said. “I have only received support and applause, no negative feedback.”

OHS’ senior class of 2024 reportedly created an online petition against the current dress code which currently has over 1,200 signatures from students and parents.