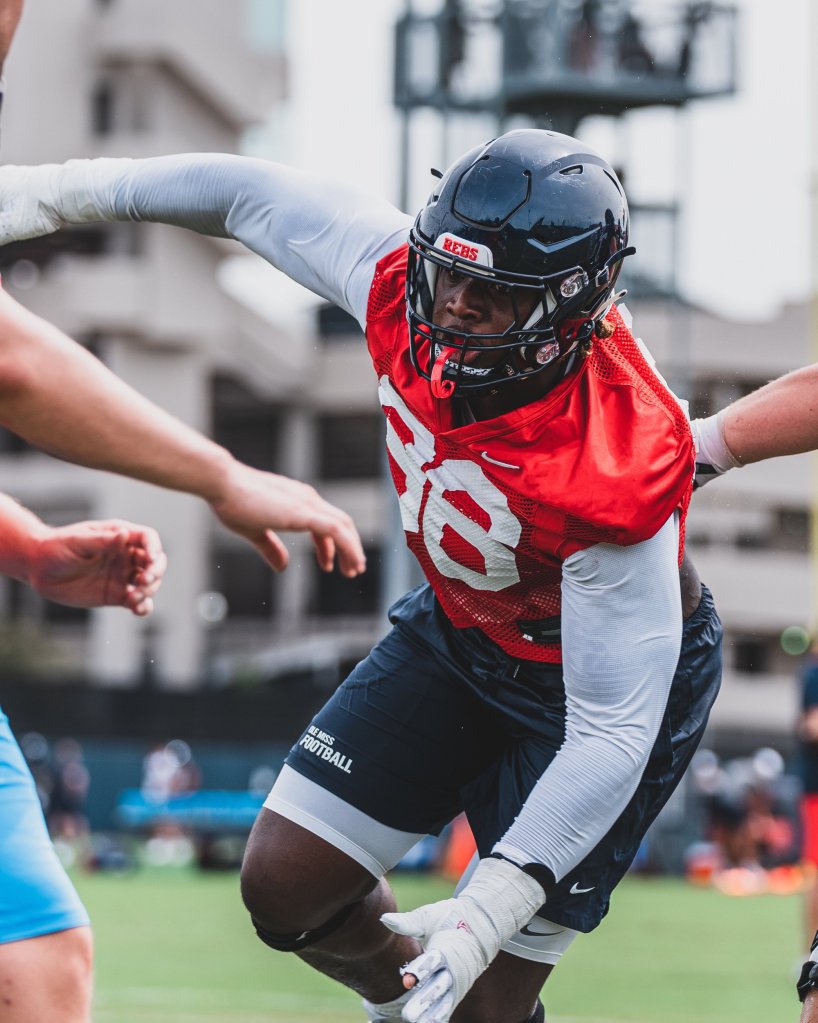 Ole Miss football wrapped up their first week of fall camp on Monday as they prepare for the 2022 season with a host of new faces on both sides of the ball.

Here’s a look at some of the storylines to keep an eye on as the Rebels attempt to replicate last year’s success with a revamped roster:

The Rebels continue to search for the heir to superstar Matt Corral as sophomore Luke Altmyer and USC transfer Jaxson Dart battle for the starting quarterback job.

Dart was the presumed favorite after transferring to Ole Miss back in January, but struggled through spring practices and completed just 11 of 33 passes for 166 yards in the Grove Bowl. He also contributed 66 yards on the ground in that game—showcasing the duel-threat ability that made him the Gatorade National Player of the Year in 2020-2021.

Altmyer also struggled with turnovers throughout the spring—leaving no clear winner in the Rebels’ quarterback battle as the season continues to draw closer and closer.

The two signal-callers split first team reps during the first week of fall camp, and neither head coach Lane Kiffin nor offensive coordinator Charlie Weis Jr. could offer a concrete answer as to who will start under center week one.

True freshman running back Quinshon Judkins stole headlines in the first week of camp with his rapid development and explosive runs.

The Rebels reloaded in the backfield this offseason following the departure of their top three rushers from last season, adding Judkins along with transfers Zach Evans and Ulysses Bentley IV.

Judkins, a three-star recruit from Pike Road, Alabama, enrolled at Ole Miss in January and made an immediate impact in the running backs room. He is already receiving more touches than junior Kentrel Bullock and senior Isaiah Woullard, and is expected to be the third-string running back behind Evans and Bentley come week one.

The Rebels feature a plethora of options in each position group—headlined by a group of safeties who could each be regular starters for most power five teams.

Seniors Otis Reese and A.J. Finley were integral parts of last year’s defense, which was one of the most improved units in the country. Iowa State transfer Isheem Young impressed during the first week of fall camp after missing spring practices due to an injury, and is expected to take over the starting rover slot.

Tysheem Johnson and Ladarius Tennison both took huge leaps after strong freshman campaigns, and will see plenty of snaps at safety and as nickel corners.

Transfer Roman Rashada has also seen plenty of looks in the first week of fall camp, and youngsters M.J. Daniels and Taylor Groves are also expected to factor into the secondary.

That’s not the only area of depth however.

Junior Cedric Johnson and senior Tavius Robinson are expected to be the starting ends on the defensive line, but sophomore Brandon Mack, junior Jamond Gordon, redshirt freshman Tywone Malone and Georgia Tech transfer Jared Ivey will likely be included in the rotation.

Sophomore Kydrich Breedlove has gotten a handful of first-team reps at cornerback along with freshmen Markevious Brown and Davison Igbinosun, but all three underclassmen sit behind seniors Myles Battle and Deantre Prince on the depth chart.

At linebacker, transfers Troy Brown and Khari Coleman are expected to see the majority of snaps, but the Rebels can also trot out senior Ashanti Cistrunk, sophomore Austin Keys.