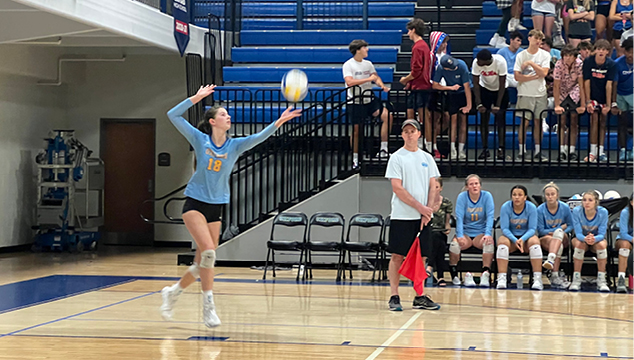 Oxford volleyball kicked off their North Half title defense in earnest on Tuesday as they swept Lewisburg in straight sets (25-16, 25-19, 27-25) to improve to 2-0 on the season.

The Lady Chargers cruised to a win in the first set courtesy of their stout defense and a stellar performance from Michael Ann East.

The junior outside hitter bounced back from a poor performance against Lafayette on Friday to help jump-start the offense with seven kills in the opening frame on Tuesday.

Head coach Ashley Martin said she was pleased with East’s patience against the Patriots—praising her ability to pick her spots and mix precision with power.

The Lady Chargers fell behind early in the second set as Lewisburg jumped out to a 5-1 lead, but Martin’s squad responded immediately—claiming 12 of the next 14 points to take a 13-7 advantage.

They rode that lead to a 25-19 victory in the second set as their defense continued to stifle the Patriots at every turn.

“I thought we played really sound defense,” Martin said. “That’s something that we’ve really focused on. Defense is what wins ball games—you can’t get a set and you can’t get a kill without good defense.”

Oxford closed out the match with a 27-25 win in a back-and-forth third set as they improved to 2-0 on the young season.

Senior Bree Lyons recorded her fourth career double-double in the victory—posting 10 kills and a match-high 13 digs. East finished the match with a career-high 14 kills to go along with eight digs.

The Lady Chargers will try to stay perfect on Thursday as they host DeSoto Central at home at 6 p.m.