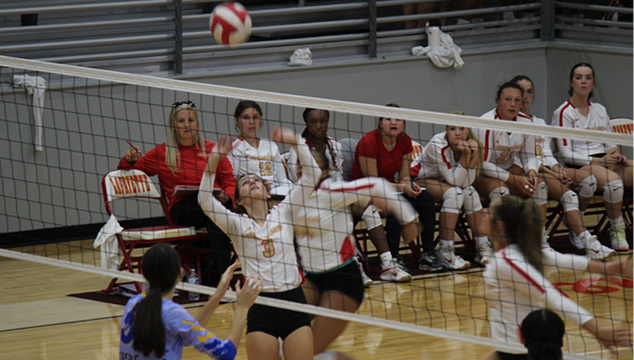 Lafayette volleyball showcased their superb defense on Tuesday as the Lady Commodores defeated Tupelo at home to improve to 6-3 on the young season.

The Lady Commodores struggled to find a rhythm to their attack early on—allowing the Lady Wave to stay in the game thanks to a few sloppy miscues. They turned it on midway through the opening set however, closing on a 17-3 run to claim the set 25-10.

After a rocky second set allowed Tupelo to get back in the match, the ‘Dores rallied back to win two straight as they shut the door on the Lady Wave’s comeback attempt with a 25-18 victory in the fourth set.

Head coach Taylor Elliott said she was pleased her team was able to record another early-season win against a 6A opponent, but added that her team will need to improve their communication and play as a group if they want to make it to the state title game for a second consecutive season.

“I just told them that we need to communicate more,” Elliott said. “If we just stay in constant communication and then we look seamless and we play really well so that’s something that we’re gonna work on moving forward.”

The Lady Commodores will be back in action on Thursday as they host Center Hill at 6 p.m.