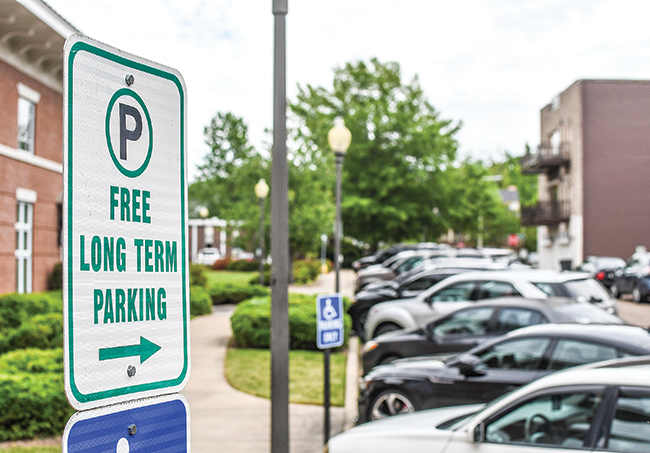 The Oxford Board of Aldermen voted on Tuesday to remove dumpster enclosures in the south square parking lot in order to provide additional parking spaces for patrons on the square. (Bruce Newman, Oxford Eagle)

The Oxford Board of Aldermen approved a plan on Tuesday that will add three parking spaces to downtown.

The aldermen gave permission to remove the dumpster closures in the south square parking lot. The removal of the barrier walls will provide better access to the roll-off garbage receptacles, and provide a more convenient experience to the removal of waste from surrounding businesses.

“With the students coming back, businesses are going to be extremely successful, therefore creating a lot of garbage, so removing these enclosures will make it more user-friendly temporarily until our future compactors are installed,” said Amberlyn Liles, the city’s Superintendent of Sanitation.

The cost for the removal of the enclosures will be $4,000. To combat the aesthetically displeasing nature of exposed garbage, the plan includes temporary fencing around the large dumpsters and used cooking oil disposal tanks. Another strategy for the beautification of these dumpsters is to place a wrap around them.

Without the permanent enclosures, the roll-off dumpsters can be rotated to alleviate their encroachment into the aisle in the busy parking lot. The parking spaces in the area south of the receptacle will be blocked off from 6 a.m. to 8 a.m. This parking restriction has already been in place for the spaces in the center aisles of the lot.

By tearing down the enclosed dumpster zone behind Landry’s and Opa, the lot will gain three new parking spaces. The city has plans to redesign the parking lot in the future, which led to concerns about the depth of any temporary restructuring.

“I just look at that alley and the restaurant right behind it, and I hate to remove that back wall of the enclosure with all that grease sitting there,” said Ward 1 Alderman Rick Addy. “I know what it smells like.”

To alleviate that issue, the grease trap will be moved to the west side of the lot, near the two roll-off dumpsters.

“I think we’d be better off to have that all in one area,” said Ward 2 Alderman Mark Huelse.

The board voted unanimously to begin the process.